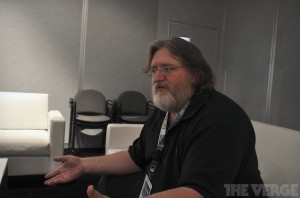 Valve CEO Gabe Newell has confirmed the existence of the long-awaited “Steam Box” in an exclusive interview with The Verge.

The big story is that the Steam gaming setup won’t just be designed to sit in front of your television, but will be a networked device that will work across multiple screens in your house, such as your computer’s LCD, perhaps, or a tablet device. The prototype box looks exactly like a Windows desktop computer, but that’s because it is, complete with a Windows license sticker on its side.

With that said, the box will be running Linux in its final form, though people will be able to install Windows if they choose, as Newell says they’re not going to make it difficult to do so. Their goal is not to make things hard to be tinkered with, just to make sure that they can control those pieces of the ecosystem that need control so they don’t feel like they’re “herding cats.”

From a control-input standpoint, Newell says this is the big point of contention for making the product work. They’ve looked at motion control and haven’t found anything beyond Wii Sports that really hits the mark. On the controller side, they’re working very hard around latency and precision control (we all know analog sticks are not even close to what you get with the precision of a mouse).

Interestingly, he says, “I think you’ll see controllers coming from us that use a lot of biometric data,” though we’re not sure how he means. He does mention “gaze tracking” which would require a camera or set of cameras to track your eye movements to see where on the screen you’re looking and use that as the control method. We’re not convinced, but we’ll give Valve the benefit of the doubt on this one.

A big thing to note here is Newell’s vision on mobile:

So this [Steam Box] is called “Bigfoot” internally, and we also have “Littlefoot.” [Littlefoot] says “what do we need to do to extend this to the mobile space?” Our approach will be pretty similar. We also think there’s a lot that needs to be done in the tablet and mobile space to improve input for games.

In one of the designs that we’re building on the controller side, it has this touchpad and we’re trying to figure out where that’s useful. We don’t want to waste people’s money by just throwing in a touchpad. Once we understand what the role is of multitouch in these kind of applications then it’s easy to say you can use your phone for it.

Unfortunately, this whole conversation is just getting started. Yesterday evening, a Valve engineer stated that there are no official plans to announce Steam Box in 2013. Valve itself is saying that PCs optimized to run Steam (whatever that means) will be shipping later this year, though they’ll be from third party manufacturers, not from Valve itself.

We’ll have to wait and see what happens at E3 this year, though we’d bet that we won’t be seeing a Valve presence there at all unless it’s to announce Half-Life 3.