And so now we know, the new titles in the Pokemon series are called Pokemon X and Pokemon Y, available globally in October 2013 for Nintendo 3DS! Take a look below for all the details! 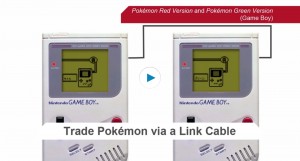 We’re being taken through the history of pokemon on the original Game Boy. It’s amazing how primitive it looks. Greyscale of course, although with some awesome features like the link cable to share with friends.

Iwata is now taking us through the Gold and Silver versions, which were massive entries in the series to bring in 100 new Pokemon characters. From there, we had Ruby and Sapphire for the Game Boy Advance which introduced us to double battles and advanced link functionality with four people.

Hardware like the wireless adapter for Game Boy Advance and SP models were developed specifically for Pokemon games which is pretty incredible considering games don’t usually get these kinds of hardware upgrades. Then again, Pokemon is not just every other game.

Iwata is talking about all the Nintendo DS Pokemon titles, all the way up to Pokemon Black Version 2 and Pokemon White Version 2. He says “which brings us to today” and we think this is it!!

Pokemon X and Pokemon Y is the next generation of the Pokemon series! Releasing simultaneouslyin October 2013, which is the first time we’ve ever seen this happen in the series!

This is clearly not a sprite-based game, with unique 3d models that look cel-shaded but very beautifully rendered. Features for the Nintendo 3DS are said to be integrated into the game, but it doesn’t look like he’s giving details on them.

“That’s all for today. Thank you very much for watching.” Wait. What?

So here’s what we’ve learned from today’s rather short announcement (most of these are quite obvious): we’ve got a new Pokemon game, with all-new Pokemon, non-sprite based character models, and in 3D to use the 3DS features. We’re not sure how much more boring and exciting this announcement could have been, but that’s about it!

As we watch the video again, the graphics are probably our favourite thing about the new games, because they’re cleaner and less pixelated than you would find with full true 3d models. It’s also worth noting that this announcement was very short; only four minutes of the 11 minute video were spent talking about the new games. 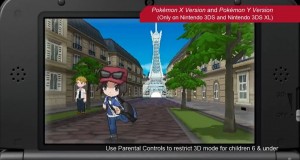 The three starting Pokemon are called Chespin, Fennekin, and Froakie. They follow the usual schemes of grass, fire, and water-type Pokemon that we’ve become used to since the first games in the series, and they look like some of the best starting Pokemon we’ve seen in a long while. The game also looks to take on a bit of the Zelda franchise with rope swings, and some of the Professor Layton series in its art style and its French-looking location.

There seem to be a lot of beautiful new gameplay elements in Pokemon X and Pokemon Y and while we’ve no doubt only seen the tip of the iceberg, we’re hoping to have much more information for you as it becomes available throughout the year.

Pokemon X and Pokemon Y will have a simultaneous worldwide release in October 2013.

If you’re the first person to correctly guess what the announcement is going to be tomorrow, you will win something cool and Pokemon related, but we haven’t decided what yet. It’ll be awesome and wicked and we’ll ship it right to your door, anywhere in the world!

Let us know in the comments below what you think the announcement is! The contest will close January 8th at 3 am Eastern / 12 am Pacific, so get to commenting!

(One comment per user. If no one gets the announcement perfectly correct, the first person to have the closest response will win.)