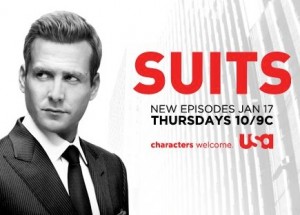 One of our favourite television shows of all time, Suits, is back after its mid-season break!

The hilarious and serious legal drama set in New York (but filmed mostly in Toronto – represent!) will be back on USA Network next Thursday, January 17th. In Canada, we’ll catch the first new episode the following Wednesday on Bravo, though we can also grab them online via iTunes.

For those out of the loop, Suits stars Gabriel Macht and Patrick Adams as Harvey Specter and Mike Ross, respectively. Harvey is a high-powered corporate attorney in New York City while Mike has faked his way through Harvard Law School and become his associate. Mike has an incredible gift; he can remember anything after seeing it, and often recites entire literary works from memory just to freak people out.

The show left us with a huge cliffhanger about the fate of the firm, and while we’d love to rehash the whole series for you right now, we aren’t going to spoil anything.

Take a look at a trailer for the upcoming season below. Oh, and Meghan Markle? Yeah, still hot.