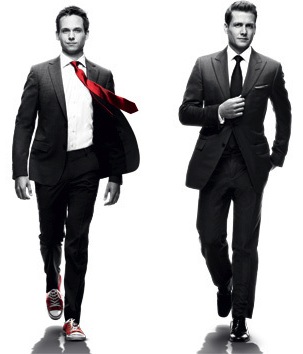 Listen up, Suitors! Your show is back on USA Network in July for another 16 episodes!

Harvey, Louis, Rachel, Mike, and Jessica return in the third season of Suits where the two main story lines of season two get into full swing. Harvey and Jessica’s relationship gets tense as the firm’s future is in the air, while Mike and Rachel are beginning what appears to be a fling, but could certainly turn out to be one of the most satisfying relationships for fans in a television series!

If you couldn’t tell, we’re super stoked about Suits returning, and we’re happy to say that it’s less than two months away! We’ve begun watching season two all over again to get ready for the next series of quick-witted Harveyisms and inane Littisms (though we do like “Litt Up!”).

The official promo for the season doesn’t have any new footage in it as they’re still filming the season in Toronto, but take a look at the teaser anyway and get excited!