Yesterday, Disney confirmed that they are indeed planning to make a few spin-off movies set in the Star Wars universe, news that comes before we have any concrete details on Episode VII other than its director and supposed release timeframe.

Entertainment Weekly is reporting today that they’ve learned details on two of these spin-offs and that they’ll both be based around popular characters of the franchise.

One of the two projects will revolve around a young Han Solo, focusing on what would likely be his origin story given that he was only about 35 years old in the original trilogy. The other will be about Boba Fett and take place between Episode IV and V or between V and VI.

As much as these films might be spin-offs, EW is noting that they might not stray too far from the usual characters we would see in a Star Wars film. Because of the purported timelines of both films, Darth Vader would be alive and well, and may make an appearance in either or both of the films. It would also leave a door open for Jabba the Hutt and a young Luke Skywalker or Leia Organa to be present in one form or another. 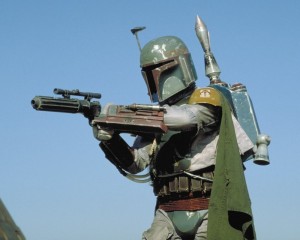 Bob Iger did announce that Simon Kinberg (Sherlock Holmes) and Lawrence Kasdan (Raiders of the Lost Ark) would be penning these spin-offs, though in which order they’ll be released or any sort of timelines attached to the films are yet to be seen. If you recognize those names, it’s because they’ve also signed up to write the new trilogy, beginning with Episode VII, alongside Michael Arndt. We like the fact that the movies will all have the same or similar writers, hopefully keeping common threads weaved between them and the storyline very much plausible. No time travel, please.

There’s also rumour of a Yoda-centric spin-off film in the works, and while we love the little old guy, we’re not sure his own film would be the best use of such a storied character. Then again, we’re not sure we need another flashy cowboy movie like the Han Solo flick might turn out to be. We’re not arguing against Boba Fett, though.

In all seriousness, anything is fair game at this point. You could say a Leia spin-off or an Admiral Ackbar spin-off are being considered. Because they either are or have been at some point. It’s very easy to say that anything could become a spin-off when we’re talking about this massive world we know as Star Wars.

EW’s cop-out on this is that the deal could always be altered further and that their information is correct as of right now but could change as production begins. They even go so far as to reference this famous Darth Vader quote.

We’d like you to weigh in: who do you think would make for the best spin-off material in the Star Wars franchise? We wouldn’t mind if Natalie Portman came back and went all Black Swan Amidala on us, but we’re not sure Mila Kunis is available for a Star Wars film. Let us know on Twitter and Facebook and we’ll keep you posted with all the latest once we find out more! We’re just hoping the Han Solo movie doesn’t take place from the end of Episode V to the beginning of Episode VI. You know, when he’s frozen in carbonite the entire time.