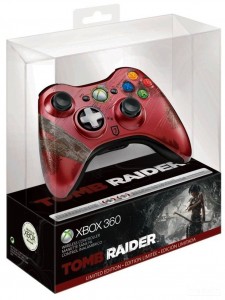 Tomb Raider has officially launched, and while we’re still making our way through the lengthy campaign and its extra goodies, we want to give you something to sink your teeth into while you wait for our review.

Two weeks ago, we unboxed the Xbox 360 Tomb Raider Limited Edition Wireless Controller before your very eyes, and today, we’re going to review the damn thing!

This controller is a normal Xbox 360 controller in functional ways, and Microsoft thought it would be a good idea (we agree) to include the transforming d-pad as part of it. Beyond that, this is pretty standard fare in terms of functionality.

Where this limited edition controller really shines is in the aesthetic details. This controller is coated with multiple layers of a shiny red paint which is then distressed with laser-etching, printed finger prints, and the Tomb Raider logo on the battery bay. 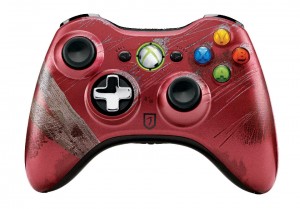 The controller also comes with a free skin for a playable multiplayer character who looks like one of the baddies from the Shanty Town area of the game. The detail on the character is incredible, from the stitching around his legs to the exposed material bursting from his sleeves.

Of course, the controller is the real draw here, and as much as we love it, we have to say that, shockingly, we can’t recommend it for playing. If you collect stuff like this and keep it sealed, this is definitely something for your collection. But at $69, a full $10 more than the actual Tomb Raider game (as well as the usual Xbox 360 Wireless Controller), there’s just not enough extras here to make it worthwhile. For the same $69, you can pick up the silver controller with the same transforming d-pad and a Play & Charge Kit to keep your controller juiced up.

In all, if you’re looking for a new controller, this probably isn’t the best deal you can find, though if you’re a diehard of the series, you might see the value in spending a few extra bucks. If not, pick up the standard wireless kit and grab a Play & Charge while you’re at it.