This week, we had the opportunity to hang out with Sony at a preview event for God of War: Ascension. We got our hands on the game as well as chatted it up with John Palamarchuk, the lead environment artist for multiplayer and cinematics in the title.

When we first got into the game, we found it a bit different than past God of War games but with some nice familiarity. While the colour palette hasn’t changed much, the game is certainly brighter than we’re used to seeing, despite its darker feel. It’s not easy to describe, but talking to Palamarchuk let us in on the fact that the game was designed to be bigger and more cinematic but keep the feel of the past games.

The way the game was made to feel more cinematic was by eliminating much of the HUD that we’re so used to seeing in games. God of War III didn’t have a huge amount of non-gameplay stuff on-screen, either, but it seems somehow cleaner in Ascension. That’s really bizarre because very little has actually been changed on-screen, but something about the game feels a lot more open and cinematic in the way everything is presented, whether in game or while watching a cutscene.

Movement, thankfully, has not been changed in Ascension other than to make it more fluid. Anyone who has played a game in the series knows just how fluid and free-flowing the movement can be, especially considering Kratos is probably upwards of 200 pounds of pure muscle, not to mention those chains. The game becomes a bit of a button masher to use those chains, but it is worth every time you hit that square button because chains start flying, blood is spewed, and beasts are brought down. 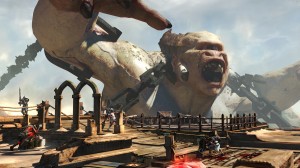 Kratos ain’t got nothin’ on those chains.

There is a stunning sense of size in God of War: Ascension, partially because the camera is so pulled back, but more so just because of how big the monsters in the game are. The game is almost reminiscent of something like Shadow of the Colossus where, as you’re fighting on what appears to be a stable platform, you realize that you’re actually atop a massive creature’s head or about to fall from the side of his hand. We’ve seen this before in God of War, but it never fails to impress and is one of those things that just makes you feel all-powerful. To bring down a creature partially made of stone, not to mention something that is probably 50 times your size, and to do it without a shirt on? Power.

On the control side, there are quick time events in the game, and while they’re excellently implemented, we’ve been spoiled by the way Crystal Dynamics has used them in Tomb Raider, something you’ll be hearing more about in our review, coming soon.

The game has an almost Uncharted vibe when you enter massive underground chambers with puzzles you need to crack to progress. It never feels tedious, and we didn’t encounter anything we couldn’t handle at first glance, but these moments add to the experience and emphasize that this is more than just an action-adventure title. The puzzles, usually made of rock and various metals, don’t eschew any cliches about tomb raiding or anything, but they’re certainly gorgeous to look at.

And that’s where we end: gorgeous. God of War: Ascension is easily the best looking God of War game yet, and it does it by reinventing some key technologies that drive it. The developers clearly realize what they should keep that made previous games successful, but they haven’t been scared to change what will help create a better game. The lighting engine was built from the ground up to support the lights from hundreds of objects as opposed to just a few dozen, said Palamarchuk. And it looks, well, gorgeous.

God of War: Ascension hits the PlayStation 3 on March 13th, and we’ll have our full review of the game around launch.

Editor’s Note: Being a God of War game, there are (female) nipples in the game, and many of them. This is Eggplante, so we felt like we had to make you aware.