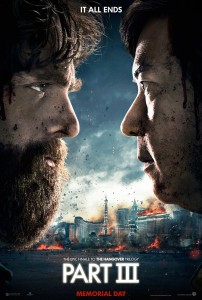 Check out the new poster for The Hangover Part III, which clearly parodies the poster for the final entry in the Harry Potter franchise, Harry Potter and the Deathly Hallows Part Two.

While you’re at it, check out the trailer for the movie, which we have to say, is getting very long in the tooth at this point. We do love the trailer opening and the serenade, but unlike the first two movies, this rest of the trailer doesn’t showcase any ridiculously over the top moments that make us want to go see the film. In fact, we know we won’t be seeing it simply because it doesn’t pique our interest in the slightest.

With that said, The Hangover Part III is a movie that is going to be widely regarded as comedy gold when it hits theatres May 24th. We can’t agree, though that’s not to say anything for Zach Galifianakis or Bradley Cooper, both of whom are excellent actors. Ed Helms on the other hand, we’re kind of “meh” over.

Take a look at the trailer below and let us know if you’re getting tired of the Hangover franchise or if you want more after this third instalment!