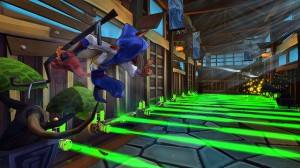 Sly Cooper is back in a brand new adventure (not a collection of past games) for both the PlayStation 3 and PlayStation Vita, and in short, we’ve had a blast with this game.

Almost everything you know and love about the Sly series is here. The gameplay is solid, graphics are gorgeous and beautifully cel shaded, and the audio is a wonderful surprise.

There’s not a lot to say about the graphics in Sly Cooper: Thieves in Time because, if you’ve played any of the previous games in the franchise, you know exactly what you’re getting. Thieves in Time isn’t here to reinvent the art style that the original games made popular for the detective-thief-hero, but the move to the PlayStation 3 certainly doesn’t hurt its cause.

Gameplay is also nothing new, but it still manages to shine as you would expect. The platforming in Thieves in Time is on par with the best of any platformer on any other system (save for some minor gripes, of course), and it really made us fall in love with this thievius racconus. The minimal HUD gives just enough information to keep you in the loop with what’s going on, but lets the HD graphics of the world really shine.

You can play through the game in a sort of calm manner (except for boss battles which are always more than a little riveting), being stealthy, and looting baddies as you go. We played through the fists route, so to speak, and went on the attack most of the way through. It’s all your choice, but we rattled through the game as we used to play other Sly adventures. There are moments where you’re not given much choice, though, and you’ll be forced into being a bit quieter, but that doesn’t come all too often, and when it does, it’s a nice change of pace. 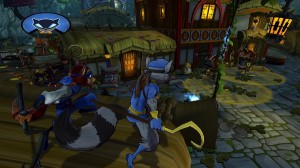 There was the occasional jumping issue, which probably had to do with a design choice that was one of the few things designers could have left out of this game: the circle button. When you jump, you press the circle button to land on a glowing blue mark. This worked well in past generations where there just wasn’t enough horsepower in the console to understand where you meant to land. Now, however, we’ve got plenty of horsepower, and the circle button is more of a hindrance than anything. Even still, you get used to it after an hour or two, and it becomes less and less of an issue.

With all that said, controls are better than most 3D platformers.

There are only a handful of worlds to explore, and while they don’t immediately seem massive, they really are. It’s very surprising to see so much content in what could otherwise be a very small and contained game. The areas don’t feel quite as large as something like Tomb Raider‘s massive island, but there’s such an open-world feel that it opens up. It’s almost like the design of some levels in Super Mario 64 in that your goal changes slightly when you return to an area (there’s quite a bit of that in Thieves in Time), and that’s never a bad thing. For a platformer that you might expect to be wrapped up into a tiny little package, there’s a lot to be done here.

The soundtrack and audio of the game is probably the most surprising aspect because it is so well done. Music is fun and whimsical, reminiscent of detective mysteries with some unexpectedly great writing. You might not think a platformer would have such a well thought out script or wonderful voice acting, but Sly does. Everything in the game comes across as off-the-cuff and unrehearsed, even though each line was probably the actor’s thirtieth take. The lines are corny, sure, but they’re so corny and over the top sometimes, that it makes them that much better. And Sly Cooper has never been a game that takes itself too seriously. 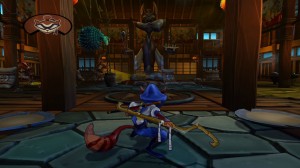 Characters match up with the quirky audio beautifully. There’s still something unique about the way Sly walks. His prance is comical and elegant at the same time. Of course, his buddies Murray and Bentley return to round out the crew, and they’re equally as charming. Murray the Hippo is loveable and bubbly as you would expect, and while Bentley is in a wheelchair, he is easily the most abled of all the characters. It’s so easy to fall in love with all three of them that you easily forgive any smaller missteps of the game. Frankly, we don’t care about the missteps because, even though they’re tropes of the old PlayStation 2 days of Sly Cooper, we’ve been

Between the characters, controls remain largely the same, and it lends to an ease of gameplay that could have just as easily be muddled by poor controls for multiple protagonists.

Theives in Time is roughly a 15 hour affair if you rush through the game, but if you spend some time doing everything, you should be able to squeeze out an additional five or six hours. There’s not a heck of a lot of reason to go back and squeeze out those hours, to be honest, but if you’re a completionist, you’ll do it anyway. 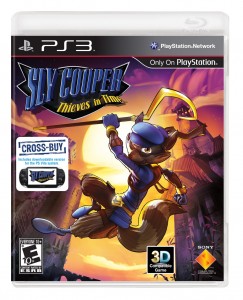 What makes Sly Cooper: Thieves in Time so much fun is that the little details are still here, even from the original Sly game. Sneaking up on a baddie to pickpocket him will trigger old-time detective music that just puts a huge smile on our face. There are homages to old arcade-style games of years past, and the tried-and-true gameplay of Sly hasn’t wavered, even though its been so many years since an original Sly game has come along.

As with most of Sony’s recent first-party titles, Sly Cooper: Thieves in Time is a CrossBuy and CrossPlay enabled game. Buy a PlayStation 3 copy of the game, and get the Vita game for free, not to mention that you can play the exact same game on both devices. Pick up and play gameplay is made possible with game saves in the cloud, and we found them to work without much of a hitch at all. Of course, there’s a slight difference in graphical fidelity on the Vita, but that’s to be expected.

Our favourite part of this whole get-two-games-for-the-price-of-one thing? The game is only $40. It’s not even a full $60 title, so how can you even begin to argue against the value here?

If you have any interest in good-ol’ platforming fun, take another look at Sly Cooper in his new Thieves in Time adventure and you won’t be disappointed.