It is the Year of Luigi as Nintendo has exclaimed, and while we agree with the statement, that’s really only because Mario hasn’t really reared his head in 2013 yet. So far, we’ve been treated to a bunch of Luigi-based content, with more on the way in the form of DLC for New Super Mario Bros. U, but until then, we’re content with Luigi’s Mansion: Dark Moon.

There’s not a lot to say about Dark Moon, really. It succeeds for the most part, but it falls short in some very basic ways. Then again, it is a new experience on the 3DS and one of the most anticipated sequels in Nintendo’s history, and we can’t fault it for that.

In the 2001 hit, Luigi’s Mansion, the title character not only got his own game (finally!), but managed to be a launch title for the GameCube. Gameplay mechanics at the time were excellently balanced and the game had a sense of charm not often seen. Flash forward to 2013 and we’re treated to the first follow-up to the game, subtitled Dark Moon. What we found missing wasn’t a sense of charm, but rather the promise of a much larger game that isn’t as tedious as the one we’ve been playing. 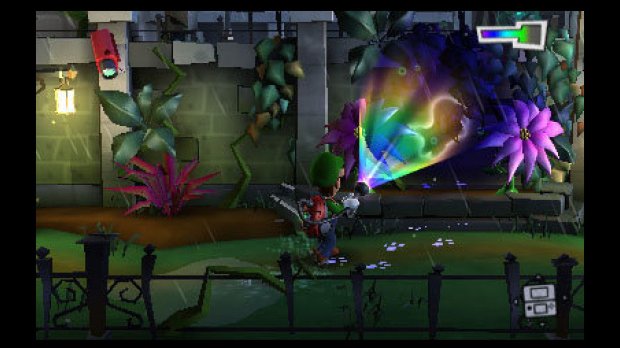 Luigi’s Mansion: Dark Moon is actually a good game, so we’ll start with what we love. The charm from the original game is here, though not to the same extent, and Luigi’s inherent fear of anything and everything in the game is comical and entertaining.

Gameplay mechanics are also very well balanced, requiring the analog stick to be moved in a direction opposite to that of the ghost you’re trying to capture, and then a quick jab of the A button to actually suck him up. It works remarkably well and is very entertaining. Almost like fishing, you pull against the ghost in a tug-of-war-like battle. Capturing the ghost is always satisfying, especially when that ghost is one that dwarfs Luigi by more than a few times.

Contrary to what we thought before playing, we loved the mission-based gameplay. We’re not entirely sure that the multiple mansions helped progress the game in any way, really, but breaking up the game into multiple chunks made it easier to play, as a portable game is usually consumed in smaller bites.

Everything about the character animations in the game have been well thought-out and executed, including Luigi’s hobbling and creeped-out tip toeing around rooms. Ghost movement is fluid and smooth, and they’re comical and add their own flare to the experience.

Audio in the game is generally well done, though that isn’t saying much since there is no voice acting nor a huge variation in the sound of sucking up enemies, collecting items, or opening drawers and cabinets. The 3DS isn’t doing the game any favours, either, but we could’ve hoped for a bit more realistic or varied sounds since we’re pretty convinced Dark Moon isn’t hogging all the portable console’s memory resources.

Our gripes with the game don’t stem from gameplay issues, graphics, or audio, though. Luigi’s Mansion frustrated the hell out of us as we played through it. In the first mansion, we struggled to complete puzzles which were obvious, yet poorly designed. Don’t get us wrong, the concepts are excellent, such as toilets that double as secret room keys and stairs that become slides to thwart your plan to get to the next level. But early on in the game, we got stuck in what should have been a simple item hunting challenge that bugged us to our core. The solution was right in front of us, but so poorly integrated into the game that we just couldn’t see it. And if the game makes you feel stupid, it fails in that respect.

From there, the game got more frustrating if only because we never felt any sort of challenge right through to the last hour of playing. In the mansions following the first, puzzles became less and less original, some almost directly copied from the first mansion, and it was a let down when the beginning of the game seemed to be strategic, if not well thought out.

We’re used to feeling like a game loses some momentum as we play it, yet neither Tomb Raider nor LEGO City: Undercover had this problem. Both of those games remained fresh and exciting to the very end, and each for very different reasons. We struggle to see why Nintendo couldn’t duplicate that in Dark Moon.

It’s certainly not all bad. In fact, the game has some of the best lighting effects we’ve seen on the 3DS. Shadows reflect off surfaces in very beautiful ways, dust collects in every corner, and almost everything has an interactive component. In the first mansion, at least. After that, the game becomes more of a lesson in redundancy than unique gameplay.

There’s a compelling multiplayer offering in Luigi’s Mansion: Dark Moon that is very much about simply exploring a level of a mansion with some buddies, and then progressing to the next, provided you can clear the level of ghosts in the allotted time. Not to be too harsh, but it isn’t very exciting.

It’s very easy to get excited about a game like Luigi’s Mansion: Dark Moon, especially when it has been so long since the original. Of course, it is very easy for that excitement to fade when you play it for real. The game makes a few missteps, but they’re not enough to destroy the experience for us, though the title does let us down in a couple of ways that are more frustrating than game-breaking.

At the end of the day, Nintendo has crafted a surprisingly varied game in some manners, yet a wildly predictable one in others. Dark Moon is worth playing if you’ve got a Nintendo 3DS, though it isn’t one of our favourite titles of the year. With that said, you really can’t argue with a charming Luigi in his most frightened state.