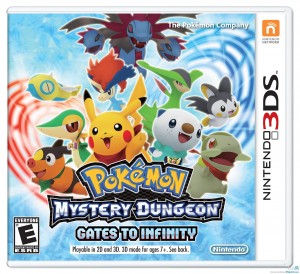 Titles in the Pokémon Mystery Dungeon line have been hit or miss since their introduction in 2006 with Blue Rescue Team and Red Rescue Team. While the later Explorer games received mediocre scores and went on to sell millions of copies, the original titles fared about average, garnering scores in the low-sixes.

Flash forward to 2013 and Nintendo and The Pokémon Company are introducing a new entry in the Pokémon Mystery Dungeon series, subtitled Gates to Infinity. Unfortunately, this latest entry fairs even worse than the original titles in the series.

Your main mission here is not the same as the usual Pokémon title you’re probably used to. Rather than command a trainer and team of six Pokémon, players actually become one of the creatures from a relatively small list of five to choose from, three of which are actually starters from Pokémon Black and Pokémon White. The other two are series classic Pikachu and Axew from the Black and White series.

In Gates to Infinity, we’re treated to some of the most vibrant colours and well-rendered graphics the 3DS has to offer. Varied terrain and a wealth of creatures offers something fresh on the platform, and it’s the game’s high point. Audio is also worth noting, though it’s nothing special. Annoying beeps chime along as text boxes fill with dialogue and other prose, but background music is quite well composed.

The mission in Gates to Infinity is the same as previous games, though elevated in a few ways that make the game more difficult. This ramped challenge is certainly welcome, but the game eschews some classic game mechanics from previous Mystery Dungeon games that just don’t make sense. Gone is the fear that you’ll lose your progress if you’re defeated as you never actually lose any foothold you had on the game to that point.

Unfortunately, the game continues a bit of a downward spiral from there. Combat has been reworked to the point that it’s mind-bogglingly stupid. Your most basic attacks do absolutely nothing, regardless of your strength. You must rely on your special attacks which, like every other Pokémon title, often come with so few uses, it’s impossible to rely on. Then again, the fact that you pick up virtually exactly where you leave off upon death serves to almost entirely undo this mechanic. 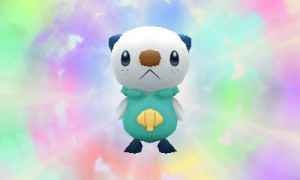 There are special dungeons to unlock along your way through this mediocre game, and while they claim to be special, there’s not a whole heck of a lot you’ll find in them that you wouldn’t find in the normal ones.

Given that Gates to Infinity is indeed a 3DS game, it’s impossible not to talk about the implementation of said mechanic. As you might expect, that too, falls short. The three-dimensional view does actually manage to do some pretty awesome work to the Pokémon creatures themselves, but the textures and environments, while bright and colourful, are marred by the perspective change. Do yourself a favour and play the game with the 3D slider all the way down.

There are a veritable ton of RPGs on the market for Nintendo’s 3DS right now, and it’s safe to say that each and every one of them is better than Pokémon Mystery Dungeon: Gates to Infinity. That’s a pretty harsh verdict, sure, but it’s deserved for a game that has two of the finest RPGs at its core yet can’t muster more than a few minutes of fun gameplay at a time.

If you’re looking for your Pokémon fix, go take a look at Pokémon Black Version 2 or White Version 2. They may only be for the DS, but they’re far better experiences than what you’ll find here. Also, we’re not far off from both a Pokémon announcement this Saturday as well as the release of Pokémon X and Y in October.