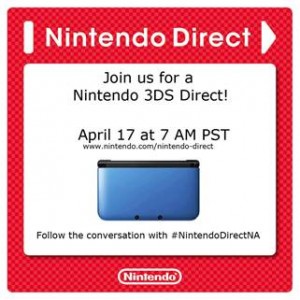 Nintendo has announced the latest in their Nintendo Direct series, a webcast highlighting the progress of announced titles, and even the format they’ve used to announce new titles.

In the last Nintendo Direct, big-N unveiled that 2013 would be “The Year of Luigi” and that he would be the focus of many a Nintendo-created title. This time around, however, Nintendo has noted that the presentation will focus on their handheld offering for Nintendo 3DS.

We’re foreshadowing a 3DS system update to take up about half of the presentation as Nintendo hasn’t made any real changes to the architecture of the platform since the handheld’s launch.

Of course, there are also a few noteworthy titles in the works, as well as a few more that we’d all like to see (Majora’s Mask 3D, anyone?), so that is where we expect Nintendo to focus.

LEGO City Undercover: The Chase Begins is certainly a title we expect focused on as it brings the widely-acclaimed LEGO City: Undercover from Wii U to the portable format. We’ve got our hands on the game and, while we can’t tell you our thoughts just yet, know that we’ll have our review of it up on April 20th at 9 pm ET.

Animal Crossing: New Leaf is the first iteration of the franchise in half a decade, and is extremely anticipated by fans. We actually got the release date for this title at the last Nintendo Direct, so we certainly expect to hear more about the game tomorrow morning. 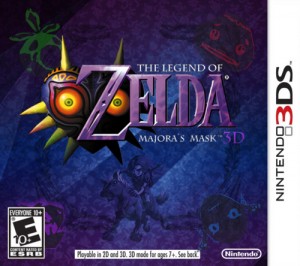 Mario and Donkey Kong: Minis on the Move is another title that was announced at the last Nintendo Direct presentation, and this will be an interesting game as it is exclusive to the Nintendo eShop. Minis on the Move hits digital downloads on May 9th, so stay tuned for that as well!

Our hearts are set on having a Zelda announcement soon, and while Nintendo has said repeatedly that they want to create an original Zelda experience before making another remake for the 3DS, we wouldn’t complain if they do both at once. Announce Majora’s Mask tomorrow and give us a new 3DS Zelda at E3 in June, and bookend the release of Wind Waker HD with them. Too much? Okay, just the one Zelda game then, please and thank you.

In all seriousness, tomorrow could be a bunch of new but relatively stale information or it could hold a ton of surprises like new games we don’t know about yet. Either way, kudos to Nintendo for keeping the information coming as frequently as they are, and we’ll have a wrap-up of the morning’s events tomorrow!

Stay tuned to Eggplante’s Twitter and Facebook pages for all the latest from the latest Nintendo Direct!