Satoru Iwata donned a Luigi hat this morning and brought along some friends for the latest Nintendo Direct presentation. Alongside Mr. Miyamoto’s first appearance, we saw Reggie, Bill, Damon, and a new face, Kit, announce a wealth of new information about what we’d see on Nintendo platforms in 2013.

Here are all the big items from this morning’s presentation:

Nintendo declared 2013 “The Year of Luigi,” signalling that they’re focusing on the green-capped hero instead of the usual Mario. This also probably confirms that we probably won’t be getting a new major Mario title this year, despite one being playable at E3 in just a few months.

Luigi’s Mansion: Dark Moon got a big preview. The game features a ton of new gameplay styles and a wide variety of ghosts, multiplayer, and multiple mansions. We’ll save our real impressions for a preview of the game we’re planning in about a week’s time.

Mario & Luigi: Dream Team is a new entry in the Mario & Luigi franchise that Nintendo launched with Superstar Saga back in 2003 on the Game Boy Advance. It is more of the RPG-focused gameplay that you might have seen in previous titles like Bowser’s Inside Story or Partners in Time, but with a lot more puzzle gameplay. The game focuses around Luigi in a new way as Mario is transported into Luigi’s dream, and you have to interact with the touch screen on the Nintendo 3DS to make Luigi move and sneeze to change the game world that Mario is playing in. It looks pretty awesome, but we don’t have a solid release date for it yet (outside of a “Summer 2013” window), so we have to assume there’s still a fair bit of development to be done before we get our hands on it.

Mario Golf: World Tour is a new, well, Mario Golf game, this being the first entry in the series on the 3DS. We don’t know a lot about it that will differentiate it from previous games in the series, but this one shares the Summer 2013 release window so we expect to find out more at E3 2013, if not sooner.

New Super Luigi U is a new downloadable content pack for owners of New Super Mario Bros. U that is promising to be a massive expansion to the original title, starring Mario’s brother. The game will take over all the levels of the original and turn them into all new courses, essentially making this downloadable content the size of a full retail title. Iwata mentions this as very large-scale downloadable content similar to the development of full software, and we love the sound of that. We know it will be paid content, of course, but really, to expand a game to virtually double its original scale is pretty incredible. Again, we don’t have a release date for this one but it will be released this year. What we’ve seen of the game looks really great, with some truly unique levels, not just slight changes to existing ones.

The Legend of Zelda now on Miiverse, even without a game on Wii U yet. Nintendo has opened up a Miiverse community so that Zelda fans can discuss the upcoming titles in the series as well as get excited about other things like Hyrule Historia and Zelda lore. As of right now, a few hours after opening the community, it’s already one of the hottest boards on Miiverse.

Fire Emblem: Awakening is getting tons of new content, including a lot of free downloads. The first of many downloadable maps is available for free until March 6th (when the price jumps to $2.50), and the Champions Map Pack is only $4, but will change to $6 on the same day. Head over to the Outrealm Gate in Awakening to pick up another two maps starting today as well, at a price of $2.50 apiece. There are also new items coming via SpotPass, StreetPass battles, and new characters.

Animal Crossing: New Leaf is coming June 9th! The game really does look incredible as Bill Trinen says, and it’s springing to life with bright colours and a lot of fun elements like animals all over town. You are the mayor of the town this time around and get to upgrade the inside and outside of your house, as well as see others’ upgrades via online connectivity. We know we’ll be sinking a lot of time into this one, and it’ll join us on the plane to E3 this year.

LEGO City: Undercover is wrapped and launching on March 18th, making this a surprise that actually made the Wii U’s launch window as promised. There are a lot of amazing new landscapes in the game that we haven’t seen before like a roller coaster and airport, and it looks like a really unique LEGO game, not one that follows in the footsteps of the franchise-based titles like LEGO Harry Potter or LEGO Lord of the Rings. There’s also a 3DS Undercover title coming on April 21st called The Chase Begins, which takes place in the same world as the Wii U game but two years before it and with a different storyline.

Wii Street U Powered by Google is available as a free download in the Wii U eShop. We’re not really sure the value of this one right here, since we’re not convinced mapping really has a place in the living room, but we’ll give it a go and let you know what we think about it soon.

HarmoKnight is coming to 3DS eShop on March 28th. The game, designed by Game Freak, the creators of the Pokemon handheld titles, is a rhythm based game that looks like a side-scrolling Mario title and takes place on more than 50 levels over eight worlds. The game looks pretty interesting as a casual title, and Game Freak is putting in an amazing bonus track from, you guessed it, Pokemon. 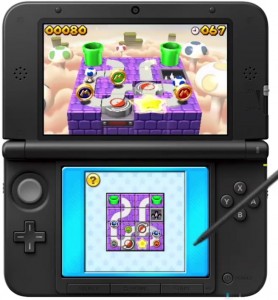 A new Mario & Donkey Kong game subtitled Minis on the Move is coming. This eShop exclusive is also a very puzzle-oriented Mario title much like Dream Team, though it takes place in the Mario & Donkey Kong universe we’ve seen before. There are a lot of minigame-like puzzles and modes as well as the ability to create your own and share them with friends online. More info is coming soon, but we don’t have a release timeframe yet, so we’d guess that we’ll be finding out more later on.

Need for Speed: Most Wanted U is coming on March 19th with a new co-driver mode which lets one player drive with the Wii Remote while another helps them out on the GamePad. There’s also the ability to play the game entirely on the GamePad, and the game also includes the Ultimate Speed Pack for free, which is comprised of five of the fastest cars on the planet as additional content over and above the retail version.

Injustice: Gods Among Us is coming day-and-date with other consoles, features off-TV play on the GamePad, as well as runs at a full 60 frames per second. If the other console versions have hiccups while running the game, the Wii U might just be the place to get the title. Take a look at Tim’s preview of Injustice.

Reggie introduced Donkey Kong Country Returns 3D, a remake of the 2010 Wii title of the same name (sans the “3D” moniker at the end). The game will be released this summer and is being optimized for the smaller screens and of course, the three-dimensional viewing of Nintendo’s 3DS. Big-N is also releasing a 3D video for the game exclusively in the Nintendo eShop which we’ve seen and have to say, it gets us excited for the game. The 3D effect is very strong, which we love because it shows how Nintendo can implement great 3D in different game genres and play styles.

It’s interesting that Nintendo has continued to say that Wii development is alive and new titles will be released, yet there was nary a solitary mention of the Wii or any new titles for it today, from itself or third parties. While the Wii might have sold well through the holidays, it’s pretty clear that Nintendo is going to be focusing on its new console going forward, not that we’re complaining about the forward-thinking!

This is probably the most densely packed Nintendo Direct the company has ever held, and Nintendo is doing a great job at showing what kinds of games are on the way, not to mention announcing new ones that will be released this year as promised. We’re excited to get our hands on them at some point soon, and we’ll let you know how they fare!