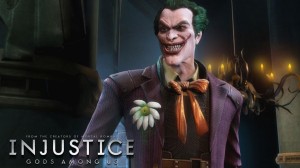 Super Smash Bros, Marvel vs. Capcom, and Playstation All-stars Battle Royale are all games that provide gamers with a gratuitous amount of fan-service. There’s nothing better than watching your favorite characters beat the hell out of each other. It’s cross-generational and platform glee injected straight into our corneas and received as a neural fireworks display of electric firings in the brain, why is why superhero fans are drooling over Injustice: Gods Among Us.

Injustice, developed by NetherRealm Studios, is a fighting game based within the DC universe. If you haven’t exploded from excitement just from the fact that the creators of Mortal Kombat are making a DC Comics superhero fighter, then you must be a Marvel purist. Speaking of Marvel, while the story behind the superhero brawl has not been revealed yet, it is being written by Marvel and DC veterans Jimmy Palmiotti and Justin Gray, who have, coincidentally, worked on comic stories together before. This kind of cosmic alignment (or “comic” alignment, ha!) sends chills down our spines, as it suggests that not only will the fighting be as epic as it should, but there will be an equally epic story to explain why our heroes are beating the snot out of each other.

From the trailers, we can assume that some sort of calamity forces heroes and villains to team up, form alliances and fight former allies and some unknown military organization. This leads to a number of fighting possibilities, including our favorite, Batman versus Superman. We don’t normally take sides but between Batman’s bat glare and Superman’s laser eyes, it’s a no brainer who wins: the player. The playable characters are broken down into power characters and gadget characters. The difference is as obvious as it was in the comics; there are the ones given power (Superman, the Flash, Wonder Woman) and then there are those who made their power (Batman, Lex Luthor, Green Arrow). The way they play vary based on their unique abilities and styles, as NetherRealm implemented a special attack button to display each characters’ specialties. 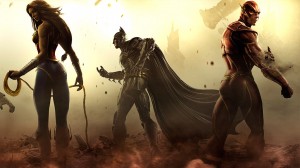 The stages that were revealed in gameplay trailers (the Batcave, Metropolis, and Arkham Asylum) perfectly display the integration of environment and gameplay. Just like in the comics, all buildings are destructible and the streets are inexplicably void of any innocent bystanders. Parts of the environment can be used for combos and attacks, which are animated and executed differently for each character. Granted, some of these things are a bit corny-looking, but the inclusion of an integrated environment is a nice addition to this game. However, one turn off for us is the fact that loose set pieces on the maps jump around like they were given a coat of super bouncy Aperture Science repulsion gel. We know this is for cinematic effect and to add to the sense of epic fighting going on, but it looks goofy and comedic more than it does amazing.

What do gamers have to look forward to on the April 19th release date? In a nice little package, this game will appeal to fighting gamers and comic lovers together. It supplies a necessary fan-service that will rake in the money for NetherRealm as well as rejuvenate the DC Comics brand (not that it needed rejuvenating). It’s likely that this game will be bought purely for those reasons, in addition to the multiplayer experience online and between friends. Despite this however, it seems like NetherRealm is trying to tell a story with its campaign in hiring Jimmy Palmiotti and Justin Gray, so there is a possibility that gamers looking for a good narrative will get something out of Injustice, too. The game looks great, with the environments and costumes getting a gritty look, gaining inspiration from The New 52 line. This is definitely a game that we’ll pick up and make sure to have a review for you come launch day.

Editor’s Note: Take a look at our coverage of the Battle Edition of the Injustice.