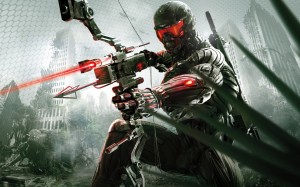 In typical fashion, EA launched another electronic goodie last week in the form of a multiplayer beta for Crysis 3. Now, given that it is indeed a multiplayer beta, there was no single player content to be found, so there are no hints to the storyline in here other than what you might find on Wikipedia. Nonetheless, we were excited to get started, after polishing off a few rounds in Halo 4’s Infinity Slayer mode, and seeing what Crytek had to offer us this time around. Jumping into Crysis 3, we found that there were only two modes available to players: Extraction, a king-of-the-hill esque game, and Hunter, which is very similar to Infection in the Halo series.

Extraction was our least favorite of the two game types, being also the one we died on the most (absolutely no correlation there). Running from pod to pod, we tried desperately to take the energy for blue team (suck it reds!); however, we had bullet in the brain syndrome, and somehow died instantly from red team guns. It might be because we were well versed with Halo and couldn’t convert to the Crysis feel, or it might be we’re just terrible at this game!

Ignoring our frustration, Extraction is a frustrating mash of first person shooter. You can run around for five minutes, find absolutely no friendlies or enemies, then get mowed down. Weapons can be found scattered around on random locations like easter eggs placed by a coked-out Easter Bunny. We can only assume that this same rabbit is in charge of respawns, because we either respawned in front of an enemy’s gun or on another planet where the battle wasn’t taking place. There is so much happening and not happening that it’s very easy to get confused, which is special when considering all one is supposed to be concerned about in an FPS is the “S” part. 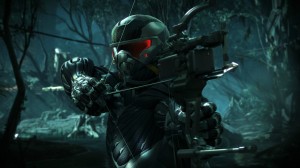 Running away from Extraction, we switched over to the Hunter game mode. Hunter pits the nanosuit- and technology-clad hunters against the nefarious and very much human cell operatives. As previously stated, Hunter is very much like Infection mode from Halo. The goal for the hunters is to kill all the cell operatives, and the goal for the cell operatives is to survive until the end of the game, at which point, they’re extracted. If a cell operative is killed, they are converted to the hunter side. Cell operatives get four choices of weapons and tech loadouts when they start, compared to the one style for the hunter. Surviving sounds easy enough, especially when cell operatives have multiple loadouts and advanced tech, but the hunters’ side is loaded with the Crytek version of the guy from The Hidden. Each hunter is cloaked with a stealth generator and very (very) lethal.

Compared with Extraction, Hunter is superbly fun. Stalking around corners as a hunter is never old, nor is the thrill of shooting randomly to reveal the location of the invisible menace after you. It obviously felt way more stacked in the favour of the hunter, but the difficulty to see a hunter cloaked, lack of environmental reaction to their approach, and radar being useless really pushed the odds toward a hunter victory. Despite this disparity, it’s still a fun game mode, and victories as a cell operative are hard fought and well worth it. All the great game mechanics we’d expect are present in Hunter mode.

Just a quick note on graphic details. Crytek prides itself on the beauty and quality of their games, which is great, and we do appreciate that in game series like Crysis and Far Cry. Despite this, however, there is something less than fantastic with the user interface we’ve seen for the multiplayer mode of the game. The interface for matchmaking and the challenge systems feels very much like a 90’s chatroom. It’s clunky, wordy, and not very user friendly. Granted, it’s in beta, so come February 19th, it could change, but it’s something we noticed and thought worthy of a mention.

Thankfully, this sneak peak lets gamers have a taste of what’s to come. While we enjoyed some parts of the game, on the whole, it’s a pretty run of the mill experience. There isn’t anything new or amazing, but there isn’t anything really terrible, either. It’s a sci-fi FPS experience, and that’s about it. That shouldn’t discourage you from getting Crysis 3 as there is still the campaign to look forward to, and a lot more multiplayer. Unfortunately, the beta experience for the game hasn’t left us wanting more, just something different.