Here’s some news to perk up your dreary Wednesday: Microsoft has announced that they will be revealing the next-generation Xbox on May 21st at the Xbox Campus in Redmond, Washington.

The invite, seen below, has been sent to numerous media outlets, though it is currently unknown what the website to RSVP is. 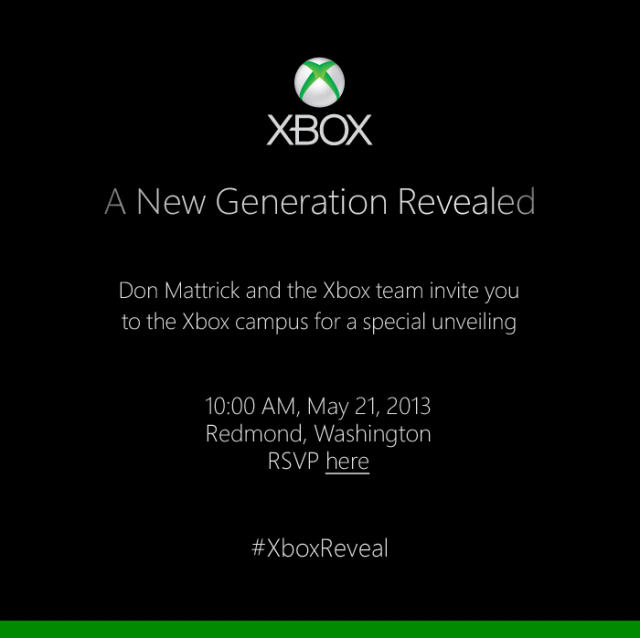 Worth noting is that Microsoft has also begun hyping up the event on Xbox.com, where they’ve posted a timeline of Xbox’s biggest moments and encouraged people to use the hashtag #XboxReveal to get the buzz going.

We’re excited that the big unveiling will be broadcast live on Spike TV in Canada and the US, as well as live streamed to Xbox.com and Xbox LIVE members via their soon-to-be-last-generation consoles.

Major Nelson has come out and said that the reveal will be “the beginning of a new generation of games, TV, and entertainment”, signalling that the next Xbox could in fact be more about consuming entertainment than consuming strictly video games.

He also writes that, after the 21st, “at the Electronic Entertainment Expo (E3) in Los Angeles, we’ll continue the conversation and showcase our full lineup of blockbuster games.” This is perhaps the most interesting news of all. Can we expect to see the next Xbox’s entire launch lineup at E3 this year? If we see it all, you better believe we’ll be getting a price and release date very soon.

While the official name of the new console is still unknown to us, we’re going to go ahead and say that it’ll be called, simply, “Xbox”. We’re also predicting a logo change, though we don’t think it’ll be a major shift away from the circular design the Xbox 360 has.

The rumoured “www.XboxEvent.com” that was registered by Microsoft back in February is nowhere to be found, though it is still listed to a Microsoft subsidiary. It is likely that, in an effort to curb anyone from believing rumours, they’ve decided against using that URL.

There’s going to be plenty of conjecture about the next-generation Xbox over the next twenty days or so. As we started with the PlayStation 4 announcement, we’ll have Eggplante! BINGO cards available for you to download and print out as you follow along with the announcement on May 21st!