Update: Nintendo has announced that Miiverse will be coming to 3DS later this year. Original story below.

Regardless of the increased difficulty of communicating the Wii U’s appeal to consumers in contrast to the Wii, people who have already purchased a Wii U can generally agree on one thing; Miiverse is awesome! A twitter-like app built directly into the Wii U’s software infrastructure, allowing people to share (via their Miis) feelings, thoughts, failures, victories and tips for any Wii U game within its own dedicated community, and even Wii U-enabled apps such as YouTube, Netflix and Nintendo TVii, Miiverse has revolutionized player-to-player interaction like never before! It has also become an invaluable tool of player communication directly with Nintendo, with Miiverse petitions even leading to the fast-tracking of an Earthbound re-release on the Wii U Virtual Console.

Due to the immensely positive reception toward Miiverse amongst Wii U owners, Nintendo has given the green light to plans of extending the app to computers, smartphones, and eventually, their current gaming handheld, the 3DS. These plans have started rapidly moving forward, as a beta version of Miiverse’s web application has just gone live! It can be accessed via a simple URL: https://miiverse.nintendo.net. This web-based portal to Miiverse can thus be used on any device with an internet browser, including PC’s, Mac’s, smartphones, tablets, and, ironically, competing gaming platforms like the PS3, Xbox 360 and PS Vita, allowing anyone with a Nintendo Network ID and Miiverse ID to access Miiverse whenever they wish, even when they’re away from their Wii U!

This may seem minor, but the ability to access Miiverse when away from home and away from your Wii U definitely has a lot of benefits! The fact that you can now access Miiverse from your smartphone or 3G-enabled tablet (or even a 3G-enabled Vita if you’re a multiplatform gamer!) should be very helpful when wanting to view community opinions on a particular Wii U title while shopping for games. You’ll have a quick and easy way to see which games most deserve your money for personal use, or may be most fun to play for a young niece or nephew, or perhaps a non-gaming spouse or family member. It also means that you can keep on top of what’s going on in Miiverse, even when on vacation, and out of the house for other such obligations, which should be great news for people who have already made a lot of friends on the application! 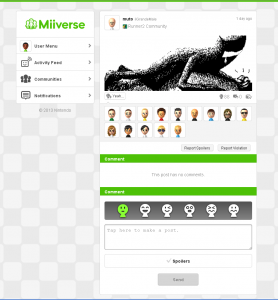 The URL has some limitations compared to directly using Miiverse on a Wii U however. It appears that you can’t make posts in any of the communities from the URL, and can only do so on your Wii U itself. You can view community posts and reply to posts, as well as give ‘Yeah!’s’ to posts if you wish (the Miiverse equivalent of Facebook ‘Likes’), but even though you can access the posts of any Wii U community you choose, you can’t start a new thread outside of your own console. The application is in beta, and it’s likely to be tweaked before the final edition of it is set upon, but the inability to post from the URL seems unlikely to change, as letting people make posts outside of their own Wii U will no doubt lead to a huge increase in trolls and spammers, even with a Nintendo Network ID and Miiverse ID being required. Still, the login process is simplified on the web, only requiring one’s Nintendo Network ID and password to be entered, so your Miiverse ID will be pulled up by the app automatically whenever you enter the Nintendo Network ID associated with it. Unfortunately, this continues to beg the question as to why Nintendo doesn’t just make a Miiverse ID and a Nintendo Network ID the same thing, as they should be!

Regardless, it is great to see Miiverse moving forward beyond the Wii U’s dashboard. The timetable for Miiverse coming to 3DS however remains unknown, as does the dedicated Miiverse app that Nintendo has in the works for iOS and Android devices. Nintendo has re-affirmed plans to eventually bring Miiverse to 3DS, though they’ve also claimed that not every past 3DS title since the handheld’s early 2011 launch may support a Miiverse community. This likely isn’t shocking, and is much like when Trophies were added to the PS3 in late 2008, with most games released beforehand never having Trophies added to them. While you can still access the Miiverse web app from the 3DS’s built-in web browser, so long as you have a wi-fi hot spot for your handheld to tap into, the Miiverse network as a whole still only includes games and apps on Wii U for the time being.

If you’re a Wii U owner that hasn’t yet tried Miiverse on the web, enter the URL and give it a look. The possibilities are definitely exciting! Also, don’t forget that the first of two important Spring updates for Wii U is going live imminently, massively reducing load times when moving between games, the dashboard and the Wii U eShop, allowing players to instantly enter Wii Mode when holding the B button upon startup, officially launching the Wii U Virtual Console service, and finally allowing the console to download and install both authorized games and updates automatically, even when it’s turned off.