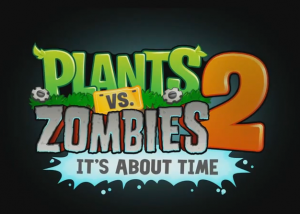 Plants vs. Zombies 2’s final release info has at long last been decided!

PopCap Games has released a rather cheeky teaser that has finally set the long-awaited sequel in stone. After showing many people literally screaming at PopCap to release a Plants vs. Zombies sequel, the teaser ends with confirmation of the game’s subtitle and release window. The long-awaited follow-up is playfully titled, Plants vs. Zombies 2: It’s About Time, which, consequently, would have been the perfect subtitle for a sequel to Chrono Cross, now that we think about it. Be that as it may, the Plants vs. Zombies sequel will be releasing this July. Unfortunately, no platforms are currently listed in the teaser, nor confirmed by PopCap.

For those (somehow) unfamiliar with the immensely popular Plants vs. Zombies, the game is a tower defense-flavoured strategy game, where players have to grow, arrange and place various strains of cartoon plants to protect their house from a horde of vaguely adorable zombies. The player must use strategic plant placements to outlast the zombies attempting to enter their house and eat their ‘brainz’, having to initially defend the front yard, then the backyard, complete with swimming pool, and finally, the roof. It’s a simple formula, but difficult to master, and outrageously gripping, even for a more casual gamer! Later re-releases of the game have added in multiplayer modes, minigames and other such bonus activities, including Achievements and Trophies for releases on dedicated gaming platforms. 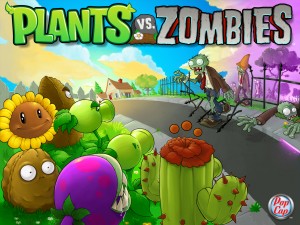 While no platforms are confirmed for Plants vs. Zombies 2: It’s About Time at the time of this writing, an initial release on PC, Mac and mobile devices is all but assured, since these remain the most frequent platforms that the original game is downloaded and played on. That’s quite a feat, considering that the game’s platform history is absolutely massive, with re-releases on almost every recent gaming-enabled device under the sun!

Plants vs. Zombies was initially released in 2009, exclusively for PC and Mac, before migrating to iOS the following year, receiving both a dedicated iPhone and iPad port, with the latter offering high-definition graphics. The huge acclaim and sales led to the game being released on the Xbox 360’s digital channel, subsequently getting a retail package on the Nintendo DS, which was followed by a digital version on DSiWare for DSi owners. This was followed by a digital release on PlayStation 3, which was soon after trailed by ports on Android Phones and Windows Phones. The game later served as a digital launch title for the PlayStation Vita, before getting its final and oddly belated release on Blackberry smartphones just this year. Like we said, it’s a long history of platforms, which is the perfect testament to the game’s runaway popularity! Any of these platforms and more could end up playing host to the sequel! 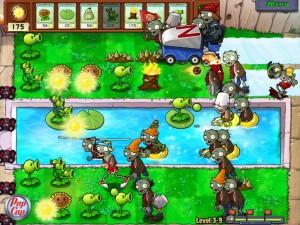 Given the July release date, it’s pretty likely that Plants vs. Zombies 2: It’s About Time will be released for Xbox Live Arcade, as its predecessor was, since it would fall in line with Microsoft’s annual high-profile XBLA promotion, the Summer of Arcade. An XBLA release would almost certainly be complemented by a release on the PS3’s PlayStation Store, which would hopefully be joined by a digital Vita release, as the Vita version of the original is the one most preferred by the majority of hardcore gamers. We would certainly welcome more Nintendo love from the sequel as well, which will hopefully also make its way to the 3DS eShop and/or Wii U eShop. The gameplay formula seems like it would fit right in with the asymmetric stylings of Wii U, and the graphics would surely only be more adorable when rendered in 3D!

Another thing that remains unconfirmed however is whether Plants vs. Zombies 2: It’s About Time is even a title meant for digital channels at all! For all we know, the game could be a larger and more fully-featured retail release! It’s not inconceivable, since there has been a franchise or two during this hardware generation that had a first game exclusive to digital channels, then upgrading to a full retail package for the sequel (i.e. Portal). Given that Plants vs. Zombies has gone on to become one of the most recognized and beloved PopCap brands of all time, a retail upgrade could certainly be in the cards, which may explain why PopCap has been quiet on the game’s planned platforms, even mere months away from release. Maybe the sequel is even being planned for the upcoming PlayStation 4 and next Xbox later on? If you look at PopCap’s job listings, you’ll see that they’re working on a ‘AAA console title’, lending credence to the theory that Plants vs. Zombies 2: It’s About Time may in fact be a larger retail package!

Regardless of which form Plants vs. Zombies 2: It’s About Time takes, you can bet your brainz that we will have more news on this highly anticipated sequel, as it develops!