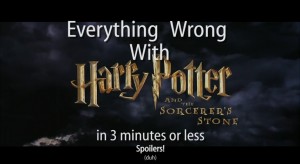 CinemaSins has been on the video site for a mere six months but has already amassed over 320,000 subscribers with a combined 26,000,000 views. The reason? Hilarious and poignant videos titled “Everything Wrong With”, among other video series.

The premise of the videos is simple, as you might expect: detail everything wrong with a certain movie. But the way each piece is executed is remarkable. They’re not only remarkably accurate, but are voiced by a narrator that has a cheeky, nerdy tone we love.

Perhaps our favourite part about the series is that, once you’ve watched a movie over and over again, you’ll still be blown away by the mistakes you’ll find in it. Iron Man had 48 sins, Iron Man 2 had 54, and good ol’ James Bond in Skyfall had 62.

Here are just a few of our favourite videos from CinemaSins. Be sure to head on over to the channel to check out more for yourself!