The Saints are back!

After their crushing victory of two possible endings in Saints Row the Third, the Boss, whose actual appearance is completely unknown to history, has set their sights on the highest office of the land. After becoming leader of the free world, what could possibly be a threat for the Saints? Two words, alien invasion. The Zin, a species bent on world conquest, have invaded earth, captured the Saints, and begun their occupation. It’s now up to the Boss and his crew to save the planet. With THQ declaring chapter 11 bankruptcy back in December 2012, there was a brief moment of panic that we thought we would never see another Saints Row game again; however, from the dust cloud of financial decay, Deep Silver and Volition, Inc. rise to the challenge to take of the mantle of this wacky and crazed series with Saints Row IV. Deep Silver, most known for the Dead Island franchise, have started releasing details for this much anticipated game, and, as expected, the Third Street Saints are back and bigger than ever.

The backdrop of the game is a futuristic dystopian Steelport with some Washington, DC mixed in, which has greatly changed the skyline of Steelport. There is a more vertical element to the world design, but since it still is Steelport, it doesn’t feel much like a new game, especially when you realize that the graphics are exactly the same from its predecessor. In fact, details that have been released thus far have all made Saints Row IV sound like a glammed up DLC, and considering that a large portion of the game, including concept, came from Enter the Dominatrix, a DLC made for Saints Row the Third, we are justifiably afraid of that direction.

Arguably, there is a lot of new content to the game. As always, the developers have concocted a plethora of powerful weapons for gamers, most of which dreamed up by a cracked­out mad scientist. One of our favorites is the Dubstep Gun, a weapon of mass destruction that drops the bass while you drop dead. Also, the amount of customization has increased to include weapon skins with the already available crew, vehicle, and clothing customization. The biggest addition to the Saints Universe is superpowers. Now instead of shooting someone with a missile packed UAV, you can freeze them, telepathically through them into a wall, and watch them shatter. This adds a new dimension to the creativity of killing, and will be the biggest free roaming toy given to gamers. If anything, superpowers will make Saints Row IV feel epic.

We look forward to playing Saints Row IV if only to get our fix of carnage and mayhem, but we do hope that Deep Silver and Volition, Inc. is making a great story to go with great gameplay. Announcements for it, such as revamped mini games, a story based off an old DLC, and rebooted world map, all point to lazy development and a push for sales; whereas, the latest additions to the Boss’ weapons cache prove that there is a creative think tank at work. Saints Row is a franchise built on freedom, fun, and comedic interactions, and that is how it should and will be graded when it comes out August 20, 2013. 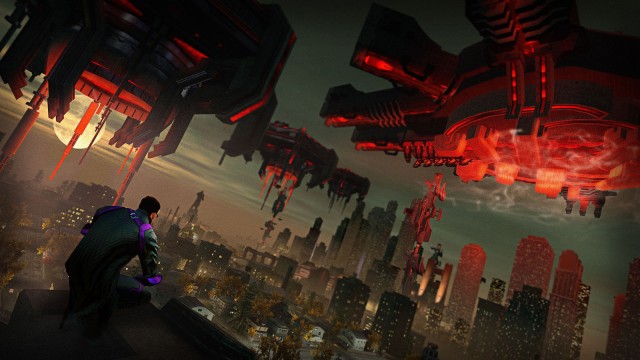