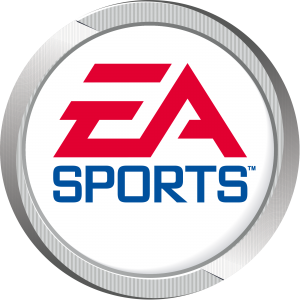 There was a lot of talk about sports at the Xbox One reveal. If you’re a sports fan, it’s clear that you’re going to be spoiled with Microsoft’s next-gen console! To that end, Electronic Arts was called on stage to reveal that four brands of sports games will be available to launch around the same time as the Xbox One, later this year! They will also be sporting a new engine; The Ignite Engine, which promises to bolster player animation, A.I. and dynamic field play like never before!

Predictably, the hotly anticipated Madden NFL 25 was confirmed to be receiving a next-gen port on Xbox One. This game is very likely a launch title for Microsoft’s new console, as Madden NFL 25 was previously confirmed for a late August release on the current-gen Xbox 360 and PlayStation 3. FIFA 14 was also confirmed to get an Xbox One port for launch, surprising no one. It will launch beforehand in September for not only Xbox 360 and PlayStation 3, but also PC, Mac, 3DS, PlayStation Vita and Wii U. FIFA 14 is also expected to be a launch title for Sony’s competing next-gen console, the PlayStation 4, which can also run the Ignite Engine.

More surprising was the confirmation that NBA Live 14 would be released on the Xbox One, with EA also making a separate confirmation that the game would be arriving for PlayStation 4. This comes on the heels of last year’s controversial decision to completely cancel NBA Live 13’s planned release on the Xbox 360 and PlayStation 3, just days before launch. It also doesn’t appear that current-gen ports of NBA Live 14 on Xbox 360 and PlayStation 3 are planned at this point. 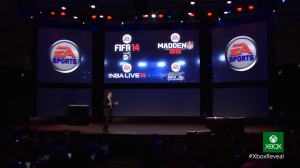 In a final bit of news, EA Sports also gave the confirmation that their new UFC title will be releasing on Xbox One, but details are at their most thin for this particular game. After seizing the UFC license for themselves however, it doesn’t appear that EA is wasting any time on their monopoly of the sport in the video game space. As gamers painfully recall, this is one of the key reasons why we recently lost publisher, THQ, with one of their top franchises, UFC Undisputed, no longer viable, since only EA is now able to release UFC games.

With so many bells and whistles related to how the Xbox One can interact with a sports television package, it’s easy to infer that sports games will also be some of the key titles on the platform! EA Sports even confirmed during the Xbox event that FIFA 14 at least would have exclusive content in the Xbox One edition of the game, specifically related to the popular Ultimate Team mode. Beyond that however, EA is likely saving the bulk of information on these next-gen games within their sports brands for their press briefing, come E3.

We at Eggplante will be keeping our eyes on the ball regarding updates on these games, so count on more news regarding EA Sports’ biggest titles, as they release on both current-gen and next-gen platforms!