Grand Theft Auto has been a huge success since it’s debut in 1997. Open world gaming was just coming into it’s own, and GTA gave it a dramatic push toward absolute freedom; of which, the end result was a discussion of violence in video games, but we won’t get into that here. Six years later, GTA is now one of the most successful series in gaming. Just as an example Grand Theft Auto IV sold 6 million copies in the first week, and now Rockstar Games seeks to beat that record with Grand Theft Auto V. Rockstar has included two Collector’s Editions, a Special Edition and Collector’s Edition, to help whet the fan’s appetites as well as bring in more sales and profit. 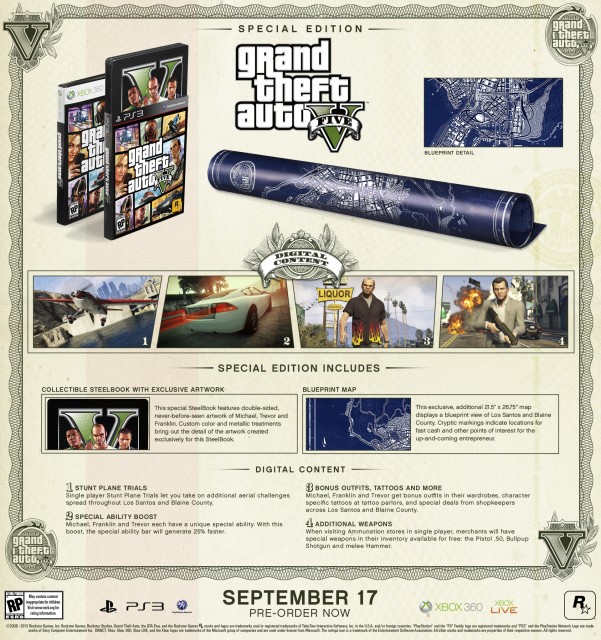 The Special Edition contains a collectible art book and a “blueprint” Los Santos and Blaine County areas, which is where the game takes place. As with most collectors editions, the Special Edition also comes with in-game content; such as, boost ability that’ll speed up the player, stunt plane trials, bonus outfits, weapons, and it gives you the Atomic Blimp as a usable vehicle. We plan to use the blimp as our getaway car, and slowly float away from the scene of the crime. Imagine how upset cops would be to see a blimp just float away with drugs, hookers, and dough, and now imagine your character giving a short slow wave as you fly away. Now you know how badass these add-ons could be in your hands.

The Collector’s Edition has all of the same bonuses as the Special Edition, but it comes with GTA V security deposit bag and key and a baseball cap with the Los Santos logo embossed on it, just in  case you wanted to relive your in-game heist in real life (We are not condoning such an action, but we will have the blimp ready outside). Additional in-game content includes original GTA characters for online play and a special vehicles for a super special vehicle garage.

Both editions supply great goodies for gamers, but are they good enough for gamers to pre-order? Of course they are, but not necessarily at the right price. Back when Elder Scrolls V: Skyrim was starting it’s marketing campaign, they added a cloth map in every game that was pre-ordered, and then had collector’s edition with Alduin, an artbook, and making-of DVD for $149.99. GTA V is giving gamers a lot more in-game items than physical swag. Swag that bring the virtual world into the real world is what really appeals to collector edition buyers.

Both the Special Edition and Collector’s Edition have a high price tag on them, retailing at $79.99 and $149.99 respectively. Of the two options, we’d pick the Collector’s Edition as it has the most swag, cooler stuff, and everything the Special Edition has an more, which is worth it for us. Plus, to make up for our losses, we can use the security deposit bag in our very own crime spree. Luckily GTA fans have plenty of time to decide how they will be spending their money, as pre-ordering for these editions won’t end until September 17th when the game launches. Take your time, and look over the perks of buying, and take the plunge in a Collector’s Edition for GTA V, at the very least it doesn’t come with a dismembered torso like some do. 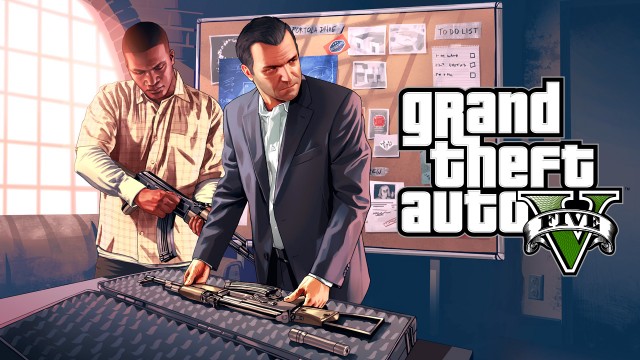