Sonic the Hedgehog ran into our hearts in 1991 as Sega’s trademark character. His high speed, side scrolling adventures kept us entertained and engaged for years, but when gaming made the move from 2D to 3D, the speedy blue fuzzball had to make a change too. In the third dimension his games ranged from good to downright terrible, and many feared that the reign of Sonic was coming to an end. Somehow, Sonic games have continued on into the current generation, and Sonic: Lost World, from Sonic Team and Sega, has just made it’s trailer debut for the WiiU and Nintendo 3DS.

Lost World takes place on a world called Lost Hex, home of some very Sega Genesis-esque world and scapes, as well as tiny animal critters. In fact, Lost Hex looks and feels a lot like the original Sonic games, with Sonic having to defeat Badniks in order to free the captive animals. However, this time it appears from the trailer that Dr. Robotnik, or Eggman if you never lived in the 90’s, will not be main antagonist of this game, that role going to the Deadly Six, a monstrous version of the power rangers. 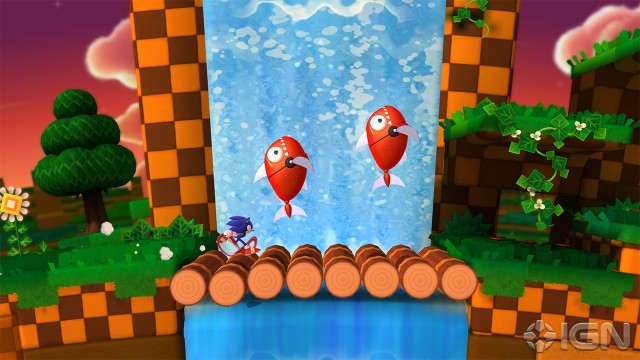 Gameplay for this game has also shifted from the more action packed platformer that modern Sonic games have tried, to a more true-to-its-roots sidescroller and platformer combo. Yes, the game is in 3D, and there are 3D level elements, but a large portion of the game is also in 2D. Sonic Generations introduced this as a gimmick, as players could switch between dimensions as old and new sonic; however, Sonic Team must have liked what they saw, as it’s moved from gimmick to integral to the level design and gameplay. These features are nostalgic, and are great to see in a franchise that needed a change to recapture it’s audience, but it’s not all nostalgia. New controls and features have been added to change the gameplay slightly. Sonic no longer runs as a default, but is initiated to run through use of a trigger button and the other trigger button does his classic “ball” mode. Also, Sonic now knows parkour, for the platforming portions of the game. There are also animals to collect, red rings to be found, and gold cannons to be taken to progress through the game, which all packs this sonic game to the brim.

This might be us being nostalgic, but we’re actually excited for this game. Yes, the villains look like mutant rejects, and parts of the game look like they were pulles from Super Mario Galaxy, but Sonic Team and Sega seem to have gone back to basics to recapture to what made their franchise great. However, a game can’t be successful on nostalgia alone, and we’re hoping that the additional content to the game will bring a newness to the franchise. We’re for one tired of the constant repeated giant monster fights, unoriginal plots, and attempts to make Sonic serious. We hoped Sega realized this after their 2006 game, Sonic the Hedgehog, but it took them four more years to figure out what fun was. The game looks fun and imaginative, and we can’t wait to get our hands on it later this year.

In the meantime, check out the trailer in its entirety below!