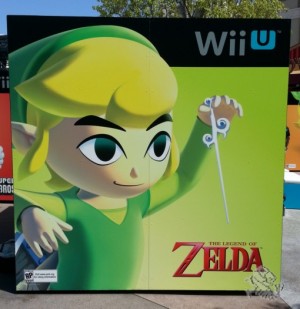 Is The Legend of Zelda: The Wind Waker going to hit retail before the end of September?

Nintendo’s Summer Showcase series is a travelling tour of sorts, aimed at showing off their latest and upcoming titles to the general public. Sometimes, the games are playable, other times, we see glimpses of trailers and other videos.

What seems very interesting about Nintendo’s latest tour, dubbed the Wii U Summer Showcase, is that we’ve seen our first glimpse of The Legend of Zelda: Wind Waker artwork outside of the announcement we got back in January.

Of course, we already know the game is coming, so this shouldn’t be a big surprise, however if you pay attention, this is Nintendo’s Summer tour. The games Nintendo shows off here should all be released within the Summer timeframe, which is anytime from now through the end of September.

So, does this mean we’ll see The Wind Waker hit Wii U as school ramps up again? Considering Nintendo has another Zelda in the works, and by our estimation, Wind Waker HD is further along in the development process, we’d guess that we will indeed be seeing the game right around the late-August through early-September timeframe.

If that’s true, that means we’re just about three months away from the release of the next Zelda title, which we expect to be followed up by A Link to the Past 2 (or whatever it’ll be called) this holiday season.

It also doesn’t hurt that not one, but two, Zelda games hit the Nintendo 3DS eShop today, and for five bucks apiece. So go grab ’em now while you can. The Oracles are waiting.

We’ll be sure to have more information from Nintendo’s E3 Direct, scheduled for 7AM on Tuesday, June 11th, which also happens to be the first day of E3. Stay tuned!