New Super Luigi U is a game with a bit of an identity crisis. It’s a new game based on an old title with new levels, but old assets. Yikes.

Luckily, Nintendo has actually managed to do what few companies out there have: put out DLC that redefines its original game to make something new, and dare we say, better, than its original.

But then Nintendo announces a brand new game – New Super Luigi U (NSLU)- completely devoid of its original protagonist and redesigned for new gameplay mechanics and greater difficulty.

The game itself clocks in at about an 800 megabyte download, though that’s using the assets from the disc-based New Super Mario Bros. U. When the game launches at retail in August, you won’t need the original game.

Visuals in NSLU aren’t exactly a step-up from the original game, though that’s certainly not a bad thing. The original title had the best Mario graphics we’d ever seen on a Nintendo console, thanks to the Wii U’s power over the Wii. We might not be getting an upgrade, but the graphics are certainly gorgeous and make for the best-looking Mario game to date. 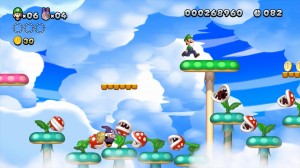 Visuals extend to the level design, and while the world maps are identical, the levels within them are all new. In fact, some of them are so new that they introduce game mechanics new to the entire series, like a three-headed snake block, or jumps that only Luigi could ever reach. The level design in the game is some of the best we’ve seen in a console Mario title since Super Mario Bros. 3, which is still the undisputed gold standard for Mario titles.

One of the most beautiful levels in New Super Mario Bros. U was called Painted Swampland, a tribute to Vincent van Gogh’s The Starry Night. Fans clamoured for more of the visually-impressive art style, and for Nintendo to extend their design to include inspiration from other sources. Unfortunately, while the level still exists in NSLU, it is a modified version of the original, and it’s the only inspired level in the game.

Controlling Luigi in New Super Luigi U is probably the biggest change from the original game, and likely the most frustrating. Luigi jumps much higher than his brother, and also has the ability to hover momentarily in the air. His drawback, however, is that he doesn’t have much traction on the ground, and that slipperiness can cost you a life or two throughout the course of the game.

Levels are designed perfectly for Luigi and the game actually becomes tougher when you get the chance to play with Mario physics after you’ve completed the title once through. We’re not even sure you can get all the star coins without Luigi’s jumping physics enabled, so don’t bother hitting that red block. 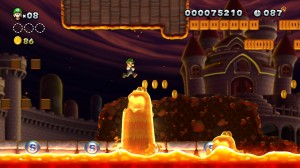 Nintendo prefaced the launch of NSLU by saying that it is quite a bit more difficult than New Super Mario Bros. U. They were right, but not in the best way. Because of Luigi’s new jump and slide mechanics, the game becomes a lot more difficult, but in an annoying way. In a way that is more frustrating that it is challenging. And since the game is quite short – about four to five hours through to completion – you don’t really have a lot of time to adjust.

Luckily, the game is forgiving in that your continues will only push you back to the last castle or mini-boss you faced, but it’s still an annoyance we’d rather not have.

There are some oddities in New Super Luigi U that we still haven’t gotten used to. One is that Yoshi only makes a couple of sporadic and brief appearances, and then disappears to be forgotten about moments later. If you turn on Miiverse at the beginning of the game, it prompts you to post a comment on the service after nearly every level, including each time you die. You kind of need to turn it on to have any sort of use of the feature, but it is remarkably frustrating, especially considering the default option is set to “Post to Miiverse”, so you can’t quickly escape the panel with a jab of the B button.

The other main oddity in the game is that the story remains almost entirely unchanged, except for Luigi taking Mario’s place in rescuing the princess. But why is Peach calling out anyone other than Mario’s name? It’s bizarre and kind of creepy, if you ask us, especially since Mario’s hat is visible on the table at the beginning of the game.

In all, New Super Luigi U is a test of patience and a measure of how frustrated you get when you play a game. It isn’t nearly as forgiving as New Super Mario Bros. U – we racked up about 14 continues compared to using maybe one or two in the original – but it is a heck of a lot better designed. The game uses largely the same assets in the game, though it adds Nabbit as a playable character this time around (and one who can’t die, to boot), but makes enough changes to call the game a new experience.

New Super Luigi U is a total treat for the Mario fan, and if you’re at all like us, you’ll appreciate the extra challenge. If you’ve only got one of the two games to pick up, we’d say play the newer, but you’ll have to wait until August to get a copy that doesn’t require the original game to play. That’s a bit of a nitpick, though, as they’re both games you should have in your (rather paltry) Wii U games collection. 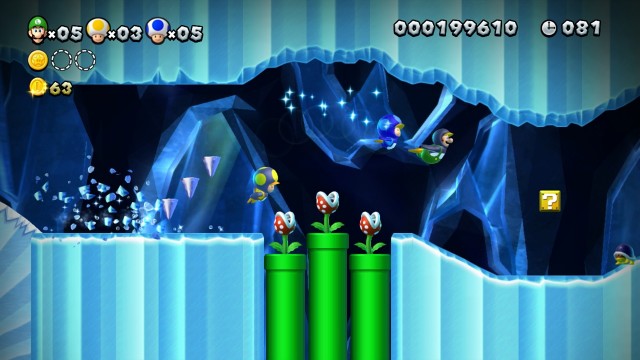 New Super Luigi U Review
New Super Luigi U is a great extension to New Super Mario Bros. U, but the only real difference is the difficulty of the Luigi-specific levels. Granted, it is still a game you should have in your collection, especially since there aren't many other options for Wii U just yet.
VISUALS80%
AUDIO78%
GAMEPLAY80%
STORYLINE62%
The GOOD STUFF
The NOT-SO-GOOD STUFF
2013-07-04
75%Overall Score
Reader Rating: (0 Votes)
0%