Do you own a 3DS? Do you love Japanese RPG’s? Well then, pay attention, because a monster of a deal is coming your way!

Perhaps in reference to the two franchises collaborating on mysterious crossover game, Shin Megami Tensei x Fire Emblem on the Wii U, Atlus and Nintendo have announced a joint promotion. It’s a very generous one as well, so avid Nintendo gamers who spend a fair bit of time on the 3DS and/or Wii U eShop had best not pass it up!

Until August 31st of this year, i.e. the remainder of the Summer for most, those with a Club Nintendo account in Canada or the U.S. simply need to register Fire Emblem: Awakening (read the Eggplante review here) and Shin Megami Tensei IV, and in doing so, they will receive a full $30 digital rebate! Wow! That’s quite generous if we do say so ourselves! It’s also irrelevant whether you buy the games digitally from the 3DS eShop, or physically from retail, just so long as it’s those two games. Nice!

The rebate can be redeemed for your digital wallet on either the 3DS eShop or Wii U eShop apparently, but, as expected, it can’t be divided across both. If you don’t have a Club Nintendo account, go here to sign up.

It’s easy, it’s free, and there are no disadvantages to having an account; Only rewards.

For those unfamiliar, Club Nintendo is a loyalty membership that allows you to register your Nintendo-related purchases, both hardware and eligible games, for virtual ‘Coins’. These ‘Coins’ can then be redeemed for rewards. Said rewards include free digital games that are cycled every month, be they Wii or 3DS Virtual Console games, or WiiWare and 3DS eShop games, as well as t-shirts, collectible cases, and much more!

Be advised however that if you are planning on participating in the promotion, and are planning to buy either game digitally from the 3DS eShop, you MUST have registered for a Club Nintendo account BEFORE you download the games from the eShop. Otherwise, they can’t be registered, and you’re, well, boned.

If you are purchasing the games physically from a retail store however, you register the games by opening them up, pulling out the Club Nintendo slip on the inside of the package, and typing the code that’s written on it into the Club Nintendo page. From there, fill out the registration survey. Again, pretty simple.

In any case, if you successfully register and fill out the registration survey for both games (the post-play survey doesn’t need to be filled out it seems, just registration), a $30 credit option will show up in your Club Nintendo queue. Click this, and from there, you get a sixteen-digit code. Punch this code into the ‘Redeem Prepaid Card’ option on either your 3DS or Wii U, depending on which wallet you want to fill, and, presto! Free $30 to spend at your leisure! While the reward doesn’t expire, be advised that you must redeem the code by September 30th, or it is no longer valid.

As we’ve indicated, this is an extremely generous offer, so if you’re at all interested in these games, be sure to purchase them, lickedy-split! Shin Megami Tensei IV isn’t available until July 16th, but Fire Emblem: Awakening has been available at both retail and on the 3DS eShop since Februrary, for $39.99. 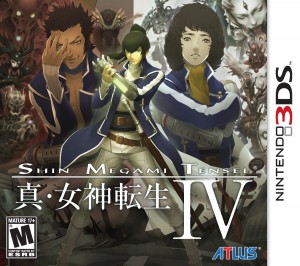 Shin Megami Tensei IV commands a higher price of $49.99, but physical purchases come with a soundtrack CD, collectible slip case and a mini-strategy guide/art book. Only the first print run gets these goodies though, and in true Atlus tradition, physical copies of Shin Megami Tensei IV are limited. Thus, if you’re buying the game physically, don’t dilly-dally!

If you’re unfamiliar with one or both of the games in question, Fire Emblem: Awakening is a strategy RPG where players control themselves, as an amnesiac tactician. They command the armies of Chrom, Prince of the kingdom of Ylisse, in battle, also fostering social relationships, managing resources and even marrying people! Joining your comrades and Chrom on the battlefield, you must fight to stop the campaign of the evil desert kingdom, Plegia, who wish to dominate the world with an evil force.

Shin Megami Tensei IV meanwhile is a turn-based, dungeon-crawling RPG. Players take control of Flynn, who must journey with his samurai companions into the vicious underground city of Tokyo. Your quest is to stop an evil samurai woman from handing out books that turn people into demons upon reading them.

For all of your necessary promotional and sales news, Eggplante’s got you covered, on Nintendo platforms and otherwise!