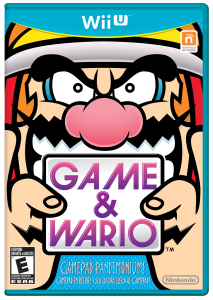 When WarioWare Inc.: Mega Microgame$ first came on to the Game Boy Advance so many years ago, it went on to inspire a whole new definition of manic fun! The series spawned not only another gyroscope-controlled GBA rendition, but also follow-ups on the GameCube, DS and Wii, each only appearing to get more innovative and more crazy! In five-second bursts, WarioWare microgames managed more creativity than most massive, triple-A game packages do in their entire final products!

Except the Wii U didn’t get a true WarioWare game. Instead, it seems to have gotten Game & Wario, a more straightforward collection of minigames that make use of the Wii U Gamepad. This could have been well and good, save for the fact that multiple Wii U bundles already exist that feature the far superior Nintendo Land as a pack-in game. Not only that, but Game & Wario only contains a paltry sixteen minigames, and none of them are terribly deep. Worst of all however is that Game & Wario just isn’t very good in general…

The game is sold for a budget price of $39.99, and honestly, it really does feel like a budget game. The small minigame selection may not have been a dealbreaker, mind you. After all, Nintendo Land has even less minigames, and Wii Sports had less than that still! The difference with those games however is that they feel rewarding and addictive. Game & Wario just feels like a frustrating waste of time, especially since several of its minigames feel half-baked and/or half-finished.

When you start a new game, you’ll be dismayed to see that you won’t even have all of the minigames available to you right away. Instead, you have to unlock them. You can access the four multiplayer games from the get-go, but the single-player challenges need to be played in a set order. Why? Nintendo Land let you play its various attractions at your leisure, in whichever order you deem fit. Why doesn’t Game & Wario? 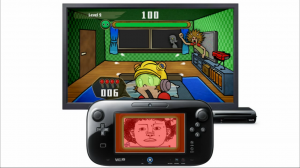 As you can imagine, some minigames in the package are real duds too, even with the familiar faces of the WarioWare series to try and dress them up. Kat and Ana’s game, Patchwork is just dragging and dropping panels to complete a puzzle. Dr. Crygor’s game, Design, is even worse. Players simply draw shapes and try to match the accuracy and size that the game tells you. Seriously? This is the best that the developers could do?! Aren’t Nintendo and their subsidiaries supposed to be the masters of creative gaming? You wouldn’t know it from looking at Game & Wario!

Fortunately, a couple of the minigames are actually passable, and do make interesting uses of the Wii U Gamepad, the sole means of playing the game, even in multiplayer. 9-Volt’s minigame, Gamer is probably the best of the bunch. Players have to play WarioWare-style microgames on the Gamepad, while simultaneously watching and listening to the television screen to feign going to sleep whenever 9-Volt’s mother enters the room. It’s actually rather enjoyable, not to mention nostalgic for many of us. Haven’t we all snuck gaming after our bedtime at least once during our childhoods? 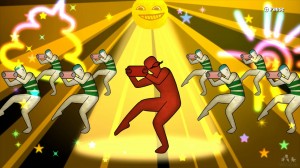 Another decent minigame is the Pirate minigame, simply because it’s just so aggressively silly that you can’t help but smirk at it. What you do with this game is, you put down the Gamepad to listen to Captain Wario’s directions. After that, you pick it up, swivel it to various angles to block arrows, and then shake them off, repeating the process. Afterward, you have to time a series of dance steps with the Gamepad in your hands. It’s the one single-player game that’s just as much fun to play with your friends around, since it’s a great way to embarrass yourself!

Beyond that though, the rest of the minigames range from forgettable to downright bad in the single-player component. There’s only four multiplayer minigames too, even if they’re a bit better-designed than the single-player games. Sure, they’re still simple. Orbulon’s minigame, Sketch is just glorified Pictionary. The Fronks’ minigame, Islands is just curling-style flinging with the Gamepad screen. Nothing complicated.

Fortunately, Mike’s minigame, Disco is kind of an interesting idea. Two players hold opposite sides of the Gamepad and use their fingers to fling rhythmic notes at each other, which the other player has to match. It’s actually not a terrible idea, even if you have to hope that you or your friend isn’t clumsy!

Penny’s minigame, Fruit is also a good use of the Wii U technology. In this minigame, one player takes the Gamepad and blends into a crowd as a thief. They have to steal fruit quickly and efficiently, while trying not to appear obvious to the other players watching the TV. After the thief gets all of the fruit, the other players pass the Gamepad around and vote on who the thief is. Whoever guesses the thief wins, and if everyone is wrong, the thief wins. It can be very clever with a big group of friends!

Unfortunately, a few decent ideas are not enough to save the faltering package of Game & Wario. You can blow through the entirety of the single-player in just under two hours, especially if you don’t bother revisiting the minigames. From there, you have little incentive to return. The only reason you may want to keep playing the minigames is to beat your high scores. Even then however, why not do that on a better minigame collection, especially since you probably got Nintendo Land with your Wii U for free?

A few more interesting ideas are tucked away in randomized capsules, which you can win in the ‘Cluck-a-Pop’ by spending tokens you earn in the minigames. Some of these prizes are interesting little ‘toys’ like bubble blowers and such that make use of the Wii U Gamepad. They’re a little amusing at first, but you’ll get bored of them quickly. As far as extras go, this is really weak, uninteresting stuff.

Game & Wario has the dubious distinction of being the first real misfire that Nintendo has released on the fledgling Wii U. The entire game feels lazy and half-baked, it’s a really poor substitute for an actual WarioWare game, and with Nintendo Land already being a vastly superior package of minigames that is free in most Wii U bundles, Game & Wario is simply left with no real reason to exist. It’s almost like the game is taking the joke of its premise too far, and was actually designed as a way for Nintendo to swindle Wii U gamers’ money on a faulty product, just as Wario does within the game itself. Oh, the irony…

So, no, we really can’t recommend Game & Wario, even if you’re one of the many early Wii U adopters that are starved for games at this point. Go back and keep enjoying Nintendo Land, because you’ll have a lot more fun chasing scores and competing with your friends on that game.

Even at a reduced price of $39.99, Game & Wario isn’t at all worth it for Wii U gamers, especially with much better games like Pikmin 3, The Wonderful 101, The Legend of Zelda: The Wind Waker HD, Donkey Kong Country: Tropical Freeze, and Super Mario 3D World being delivered to the console by the Big N over the next few months.

Come on, Nintendo! you’re better than this!