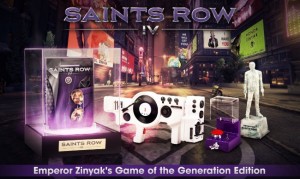 Saints Row has never been a game that sticks to the status quo. It parodies games like Grand Theft Auto and references countless others within it, making a joke of basically the entire gaming industry.

So, rather than series developer Volition releasing a collector’s edition, or something they might call a game of the year edition, they decided to take it one step further. Enter Saints Row IV “Game of the Generation” edition.

There are only 5000 copies of this game being made, and at $129, for a game that is wildly popular for its gameplay and humour, those shouldn’t be too hard a sell. The generation edition brings together everything from the ridiculously-named “Super Dangerous Wub Wub” edition, in addition to a rotating, light-up display case to show off the game.

Realistically, that’s not much extra, considering what you’re getting out of the quite well-packed $99 edition. Then again, if you want to show off your game in an awesome rotating display (and we suppose you could sub out any other game, really), then the Game of the Generation edition seems to be the way to go!

Which one will you be picking up? Let us know on Twitter and Facebook, or in the comments below!