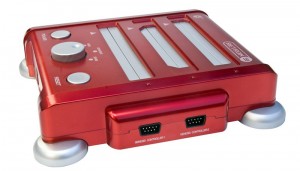 Just looking at the RetroN 3 you’ll quickly realize that this third party console is meant for accessibility.  For many, retro gaming and retro game collecting is a daunting task, which still boggles me to this day; however, you can’t deny other issues that come into play, particularly space. If you’re someone who’s a casual nostalgic and care not to go above and beyond in your retro game collection, Hyperkin’s RetroN 3 is a sensible option without all the bells and whistles.

First off, let me say the RetroN3 isn’t exactly visually appealing. It might be a big turn off for some, but with the capabilities (letting you play your NES, SNES and Genesis games all in one machine) this console’s looks should be the least of your concern.

The wireless controllers, on the other hand, pay homage to the Genesis turbo controller and look pretty nice when compared to the clunky, busy design of the RetroN 3. However, despite all that, you’ll probably want to avoid using these controllers at all cost. While the controllers might look nice, their infrared wireless capabilities are shoddy at best.  Combine that with the two required AAA batteries, flimsy build and screw-in battery cover, and you’ve got yourself a pretty unreliable pair.  Luckily, the RetroN 3 has two ports for each original controller so do yourself a favour and grab a few from your local indie store, thrift store or online.

Regardless of what console you decide to tinker with, the RetroN 3 plays each seamlessly.  Whether you’re playing a high-flying space shooter, button-mashing beat ’em up or traditional turn-based RPG, the connectivity works perfectly as long as you use original controllers.

As an avid retro gamer, I’d like to think that consoles like the RetroN 3 can help keep retro gaming alive. There’s something so rewarding about retro game hunting and it’s nice to see companies like Hyperkin attempt to make that passion come alive in even the most casual of fans. While the RetroN 3 may not be perfect, it serves an important purpose in the retro market and one I wholeheartedly support.