One of the youngest visionary directors in Hollywood, Neill Blomkamp’s debut feature, District 9 turned heads back in 2009. Even on a barely-existent budget and with no name actors, District 9 nonetheless became one of the smartest, most memorable and most intense sci-fi movies in recent memory, cementing Blomkamp’s pedigree in the genre single-handedly!

Blomkamp was once supposed to direct the since-aborted Halo movie, with District 9 becoming something of a consolation prize for the filmmaker. After viewing District 9, it was difficult for me not to keep wondering what might have been with Halo. After all, it’s pretty well objective at this point that Blomkamp likely would have made a smart and action-packed Halo movie like the kind us fans had always wanted! I could only imagine what Blomkamp could do when given an actual budget and recognizable actors…

Fortunately, that Halo fantasy can now become just a little clearer, thanks to Blomkamp’s more expensive and large-scale sophomore effort, Elysium. Packing well-known actors, Matt Damon and Jodie Foster in starring roles, and reuniting Blomkamp with his District 9 lead, Sharlto Copley, now portraying a key villain in the story instead of the hero, Elysium tries to outdo District 9 in production value with a new and grander story, but not in the process of sacrificing the intelligent social commentary behind proceedings.

Once again written by Blomkamp as well as directed and produced by him, Elysium is a very worthy follow-up effort to District 9 in most respects. It’s just as smart and inspired as District 9 was, and the added spectacle never overrides the clear amount of heart and passion that Blomkamp has put into the writing. All in all, like District 9 before it, Elysium is a fashionably late Summer offering that nonetheless stands as one of the most memorable, original and yet entertaining Summer movies of the lot!

That being said however, some of the writing in District 9 was definitely stronger. That’s not to say that the writing in Elysium is bad. On the contrary, this is definitely one of the better Summer movie scripts of 2013! Even then however, it feels like Elysium has a few more contrived spots and plot hiccups than its spiritual predecessor. It’s still a great story, but there’s definitely a few added holes in it compared to District 9.

In any case, the movie is about one Max da Costa (Matt Damon), an orphaned ex-con who works for the powerful Armadyne Corporation. You see, in the year, 2154, when Elysium is set, Earth has become ruined, diseased and over-populated. As a result, the rich and powerful have built themselves a private space station society called Elysium, which orbits Earth, still inhabited by the poor, sick and less fortunate.

Armadyne is the company that built and has since managed the utopian Elysium society, where inhabitants never get old or sick, and are free to pursue a rich, leisure-filled lifestyle indefinitely. This leads to repeated attempts by Earth’s lower-class populace to try and sneak onto Elysium for its free and limitless health care, often only to be shot down by the station’s ruthless Secretary of Defense, Jessica Delacourt (Jodie Foster).

Yes, the social commentary is more thinly veiled here than it was in District 9. Blomkamp clearly has much to say about the rationing and privatization of health care in our modern society. Elysium also speaks at length about societal class systems, over-indulgence of upper-class citizens, and the inexplicable fracturing of society when we all stand as citizens of Earth. 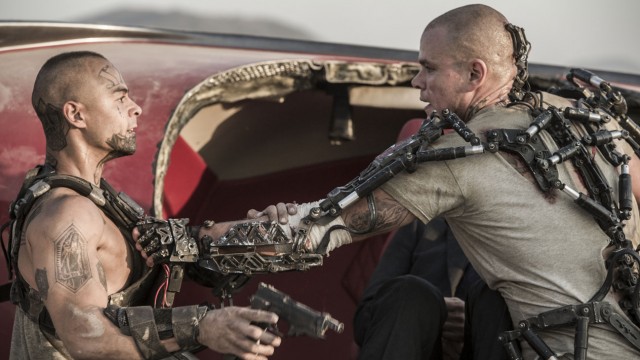 Honestly, while the commentary is still sharp and thought-provoking, it does feel a tad less clever in Elysium than it did in District 9. This is especially true when it sometimes edges a bit too far into the blanket statement of claiming that all rich people and corporate figureheads are selfish, heartless people with no regard for the lives and well-being of those less fortunate than themselves. That’s clearly not true in every last case of our modern world’s elite class, and it can occasionally make Elysium feel a little heavy-handed, and at worst, mean-spirited to the upper class.

Thankfully, Elysium tends to right itself whenever it’s in danger of being stuck too far up its own rear end. This is thanks largely to how consistently likeable and charming Matt Damon can be trusted to be in a lead role. Even as an ex-con, Max is a loveable scamp that clearly has a lot of friends on the ruined Earth below Elysium, a place he predictably wants to buy his way into someday, partially motivating his former life of crime in the first place.

The story properly kicks off when Max is exposed to a lethal dose of radiation following being bullied by his dick superior. He is given five days to live, and, in a bout of desperation, seeks the help of a former criminal handler. The handler tells him that the machines of Elysium can cure him, and they formulate a job to steal fake Elysium citizenship, after fitting Max with an exosuit that will combat his fatigue and symptoms. As you can predict, things don’t go according to plan, motivating Secretary Delacourt to send Elysium’s most psychotic sleeper agent, Kruger (Sharlto Copley) to neutralize Max.

It’s thanks to Kruger that the movie has any action at all, frankly, as he’s basically everything that the hyper-civilized and regulated Elysium doesn’t like on their paperwork. He’s violent, unpredictable, deranged, and his use makes Secretary Delacourt quite unpopular with Elysium’s government. Fortunately, he wields all of the big guns, and is the one chance for Matt Damon to make use of his action pedigree from the Bourne movies.

Like District 9, Elysium also contains quite a few surprisingly gory moments of violence too! Sci-fi fans will once again love seeing Blomkamp’s incredible imagination in regards to believable future weaponry (one of the worst disappointments of Blomkamp’s Halo movie falling through!), and some of the gruesome kills in Elysium are undeniably as awesome as they are nasty!

Granted, if they’d been removed (along with the many f-bombs) to reduce Elysium’s R-rating to a PG-13, the movie wouldn’t have lost all that much, and opened itself up to a wider audience to boot. Still, you can’t fault Blomkamp for wanting his handful of action scenes to have some teeth in such a play-it-safe modern Hollywood ecomony, that’s for sure!

On this note, I did see Elysium in IMAX, and the IMAX cut is generally pretty solid. It does make the action scenes and atmosphere seem a little more immersive and gripping, and it certainly never detracts from the movie.

With that said however, even if it is a boost, it’s ultimately a small boost, and nowhere near the sizeable difference that you’d see in IMAX showings of Pacific Rim or Star Trek into Darkness. If you’re on a budget, or could care less about going all out, you’d do just as well by just watching a standard digital screening of Elysium. Like in the case of District 9, Blomkamp is a very budget-smart director. He doesn’t waste funds on bells and whistles that he doesn’t need to realize his movie. This budget sensibility is why Elysium is merely good in IMAX, as opposed to awesome and essential. I wouldn’t be surprised if the existence of the IMAX cut was studio mandate, and not Blomkamp’s own idea.

Either way however, Elysium still stands as one of the most ambitious and smart Summer movies of this year. It’s been a long time coming, but Blomkamp beats the trend of sophomore slumps in style, with a second movie that almost entirely realizes the intelligence and originality of its spiritual predecessor!

If you enjoyed District 9, or even if you haven’t seen it and are just looking for a smarter and more memorable original sci-fi movie than most, Elysium must be seen before this Summer is up! Whether or not to go IMAX (if you have that option) is a matter of personal preference, but trust me, sci-fi fans and Blomkamp fans alike will find Elysium to be a refreshing food-for-thought Summer blockbuster that nonetheless doesn’t skimp on sheer entertainment value.

Now, can we just get Blomkamp back directing that Halo movie?! I think he’s more than proven himself now! 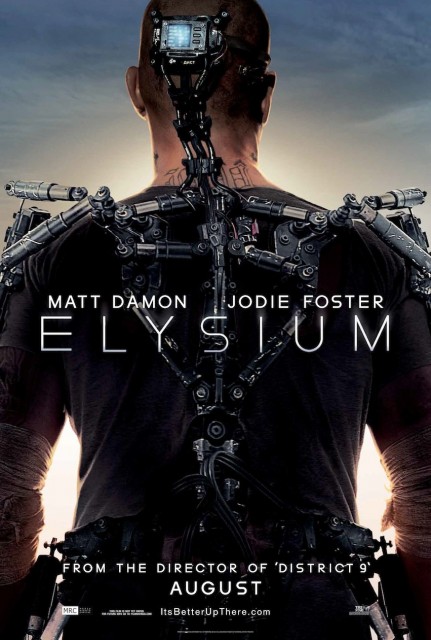