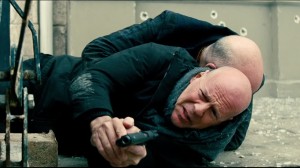 Back in 2010, RED joined The Mask and Wanted in the esteemed league of comic book movies that had almost nothing to do with their source material beyond the title and lead character, and yet could arguably be considered superior to the printed panels that inspired them!

Originally written as a dark and serious revenge comic, the movie adaptation of RED was instead a silly action-comedy about retired secret agents causing mayhem after one of them is targeted by the bad guys. Rather than having the term, ‘Red’ being a status indicator for a rogue agent like in the comic, it instead became an acronym in the movie, standing for, “Retired. Extremely Dangerous.”

RED had no right to be successful, and yet, it was both critically and commercially well-received, turning a nice profit at the box office as well!

Of course, as Hollywood are big believers in the Lays philosophy of not being able to enjoy just one, they commissioned a sequel, even though the comic miniseries (that it had nothing to do with anyway), only had a brief three-issue run. With so many fan-favourite characters and so much enjoyable carnage in the movie, surely recycling the formula would yield yet more surprisingly potent box office results!

And that’s what the filmmakers did. RED 2 completely rehashes the formula of its predecessor, with only a few minor changes. Its protagonists become targets, a hapless squeeze gets caught up in the craziness and has a little too much fun (Mary-Louise Parker is still one of the best parts of these movies, by the way), Helen Mirren gets to be a badass contract killer because she’s so polite (that’s the joke! Get it?), and the older generation of actors get to re-affirm that they still have plenty of fight left in them. If it worked once, surely it could work again.

To be fair, RED 2 still does theoretically work. It just offers very little in the way of surprises. Many of the highlight moments in the movie were given away in the trailers (don’t you hate that?), and, while the movie is still funny and reasonably entertaining, it’s also incredibly forgettable. It’s a blatant example of a forced Hollywood sequel that was only made because the original made money when nobody expected it to.

So, as the original movie ended with our merry protagonists driving into the sunset after a job well done (well, minus Morgan Freeman, unfortunately), they’ve since largely gone their separate ways. John Malkovich’s Marvin is still a crazy person. Helen Mirren’s Victoria is keeping busy with more assassinations. Bruce Willis’s Frank and Mary-Louise Parker’s Sarah have also become a boring couple that spend their highlight moments at Costco. Oh, and Sarah is bored with her life. That’s what happens when you hook up with someone on a combat high, kids. Protip.

Fortunately, Marvin is there to formulate a contrived excuse for an inciting incident, one that (somehow) makes Frank and Sarah two of the world’s most wanted criminals, and then, the RED formula is allowed to do its work again!

Allow me to warn you; RED 2’s plot doesn’t make a lick of sense, and frankly, it barely matters. The original RED’s storyline was already quite a stretch, granted. RED 2 however will often strain your suspension of disbelief to breaking point. It’s best that you enter this movie with the full intention of not taking it seriously, or you’re just going to be frustrated at the numerous plot holes and contrivances! 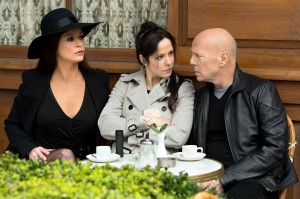 Fortunately, all of the actors seem to be having a great time anyway, so it’s difficult not to enjoy RED 2 on at least some level, in spite of itself. The new additions to the cast seem to be equally in on the joke, between Catherine Zeta-Jones’ Russian spy, Katya, who had more than a little romantic history with Frank, and Anthony Hopkins’ crazed nuclear physicist, Dr. Edward Bailey. Even Byung-hun Lee’s stoic and ruthless hitman, Han is forced to let loose and be ridiculous by the time the movie approaches its climax.

If nothing else, the movie is carried by the incredible chemistry and energy of the main cast, who are once again very appealing. Again, the plot is asinine and doesn’t matter a lick to proceedings, but taken as a loose collection of fast-paced gags, RED 2 accomplishes enough to get by, even if it does recycle jokes from the first movie here and there. To this end, Brian Cox even returns for another cameo as Victoria’s own Russian lover from way back when, Ivan. As before, he’s a highlight, and deserved to have more screentime.

It’s difficult to go into much detail about RED 2 however, because the thought process seems so barely existent. It’s just such a silly, but ultimately shallow sequel. It offers entertainment value to people who enjoyed the first movie, but doesn’t give a whole lot of incentive for people who didn’t see the first movie to jump on to the second. To people who haven’t seen the original, or didn’t like it, RED 2 will just look messy and juvenile. You have to appreciate the joke behind the first movie to get anything out of the second.

Even if you did enjoy the first movie however, as I did, and freely admit to enjoying, RED 2 feels like something of a lukewarm follow-up. There’s technically nothing overtly wrong with it, beyond the swiss cheese of a plot foundation, but it never goes above and beyond either. It just simply… exists. Yeah, it’s one of those movies. It doesn’t necessarily cause any offense for it being made, but it contributes nothing to the cinematic medium, nor the 2013 Summer movie season either. 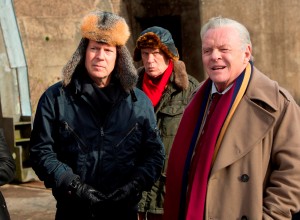 Despite RED 2 stumbling at the box office compared to its predecessor, the studio has already commissioned a script for RED 3 to boot. Clearly, Summit Entertainment at least can’t get enough of making these movies, and, in a way, it kind of makes sense. Everyone seems like they’re having fun, and to make things even better, it’s not like these movies cost a lot of money beyond the actors’ salaries, or are difficult to make for that matter.

Unfortunately, I feel, without some drastic (and risky) changes to the formula, the absurd premise of RED may have shown through RED 2 that it really had nowhere to go after the conclusion of the original movie. RED 3 could very well end up being the straw that broke the camel’s back, since RED 2 was lucky enough to re-assemble enough of the bottle shards that captured that lightning back in 2010. In the case of RED 3 however, the odds are against it. Maybe Summit should just let sleeping dogs lie.

So, put simply, if you liked RED, you’ll like RED 2, but it won’t be anything special. You could just as easily wait for it to drop on Netflix, since a theatrical viewing doesn’t really add anything to the experience. The fact that the movie made the incredibly poor decision of opening on the same day as numerous other movies doesn’t help matters, trying to recklessly compete with Dreamworks Animation’s Turbo, Mary-Louise Parker’s other Summer starring offering, R.I.P.D. (ironically directed by the first RED movie’s director too), and the vastly superior horror movie, The Conjuring, not counting limited releases. RED 2, what were you thinking?!

This horse still has life left in it, but next time around, Summit will be more than likely trying to beat its lifeless remains. If you’ll forgive the pun, perhaps RED should be itself retired after this, lest it just start embarrassing itself.