After you awaken in a mysterious facility, with nothing but a black suit and some spy goggles, you may find yourself questioning your purpose in this mysterious place. You’re just one of many exactly like you. You’re expendable, disposable and very likely to be slaughtered at any moment. Brutal hazards and obstacles await you around every corner. With only the guidance of a mysterious consciousness writing condescending comments on the walls, you have no choice but to press onward and try to fulfill your mysterious reason for existence.

Such is the foundation of Stealth Inc.: A Clone in the Dark, the first of four spotlighted indie titles on the PlayStation Store during Sony’s PLAY 2013 promotion. A touched-up re-release of downloadable PC game, Stealth Bastard Deluxe: Tactical Espionage Arsehole, Stealth Inc. pretty much functions as a blend of Splinter Cell and Super Meat Boy. It’s brutally difficult and must be played like surgery, but overcoming its many tricks and traps comes with an incredible sense of accomplishment.

We’re not kidding about the difficulty either! Stealth Inc. will kill you quickly and often unexpectedly for even slight mistakes. It’s a very unforgiving game! Yes, you are given infinite retries, and death will simply spawn you back at a generously-placed checkpoint within the stage you’re currently in, but this is not a game for impatient and easily frustrated players! You have been warned!

In any case, Stealth Inc. is a puzzle-platformer at its core. Each stage puts you in the role of a nameless clone that you must navigate through a series of sadistic and challenging obstacle courses. The gameplay is as simple as using the Directional Buttons to move, pressing the X button to jump, holding the Circle button to crouch, and using the Square button to both flip switches and interact with Terminals. No other buttons are really used. 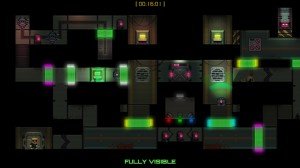 The object of each stage is to hack every Terminal and then reach the exit door. Sounds simple enough. Where it gets difficult is through the task of continually needing to master new and deadly threats!

Stealth Inc.’s main gameplay component is divided into eight ‘Sectors’, in turn broken into seven standard stages, a boss stage, and two hidden stages you can unlock; One by getting an S-Rank on every stage, and the other by finding every collectible Helix in a given Sector. Every Sector introduces a new obstacle or trap, and every stage design makes the very most of this new challenge, constantly forcing you to think and adapt as you play.

What makes Stealth Inc. so impressive and rewarding, despite its incredibly high difficulty, is its thoroughly stellar level design! Each Sector’s stages are designed with an incredible amount of creativity, making the most out of traps that are easy to understand, but difficult to master! What developer, Curve Studios has done with even such limited assets is a masterwork of challenging and clever indie game design!

Of course, the varied nature of the stages does occasionally create a wonky difficulty curve in a couple of spots, even if Stealth Inc. is consistently a challenging game overall. There’s certain stages that will kill you continually and border on excessively frustrating, but will sometimes be followed with simpler puzzles and minimized threats in the next stage, which are much easier to solve. It’s not common, but it is noticeable that certain stages, even later in the game, are less of a headache than others with seemingly no rhyme or reason. 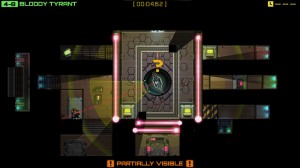 Still, you can’t discount how creative the stage design is. Even the more devious puzzles never feel like they have abstract solutions that don’t make sense. With enough perseverance and thinking outside the box, you’ll overcome a tricky set of obstacles and feel rewarded for solving a legitimate challenge that the developers threw at you.

In fact, completing the entirety of Stealth Inc. is its own reward, beyond any Trophies you may earn. It’s a throwback to a simpler time, when video games weren’t designed to be beaten like the many narrative-driven video games of today. It’s person-vs.-machine at its finest!

Consequently, many of the story elements in Stealth Inc. are a mystery. The only other ‘character’ in the game is some mysterious entity that writes messages for you on the walls. Oftentimes they’re sarcastic and condescending, but sometimes, they’ll be cautiously optimistic and supportive. Yes, it will certainly remind you of Portal’s GLaDOS, but the true identity of this mysterious stranger is never truly made clear, even if beating the game will finally tell you what all your hard work has been for. The result may shock you!

Wanting to know the answer of why so many clones are being slaughtered, and why they’re being made in the first place, is also a strong motivator to keep you pressing on, even against seemingly impossible odds! The boss levels will particularly try your skills and patience, as you’re pitted against a ‘Sentinel’ that can always see you and shoot you dead whenever you’re not hiding in a set of moving shadows. It’s still just a matter of reaching the exit door after hacking the Terminals, and you don’t directly attack the boss, but that doesn’t make these stages any easier! 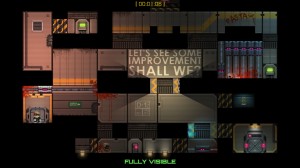 Thankfully, you don’t just net a Trophy for finishing the boss stage in every Sector, but also a twisted and undeniably amusing E-mail about ‘Company Policy’. Again, it’s very Aperture Science-flavoured for you Portal fans, but that just makes the chuckles these E-mails will likely elicit feel all the more like a decent reprieve from the sadistic challenge you’ve gone through up to that point!

Anyway, since you’ll spend every other moment trying to deftly run and jump through the shadows, we must say that the touched-up visuals in the PlayStation builds are actually fantastic! The light and shadow effects are superb, nicely compensating for the dull and dreary corridors you’re consistently sneaking through.

Thanks to the great lighting effects, you’ll always know when and where is the best place to hide from obstacles and enemies seeking you out. Failing that, your goggles will also cycle from green to orange to red, depending on how visible you are. It’s a small touch, but it firmly stamps out any doubt as to how vulnerable your easily-destructible clone is at any moment.

Oh, and on the note of the PlayStation re-releases, Stealth Inc. is a cross-buy offering, being another success story for the PlayStation Pub Fund program. Downloading the game for PS3 gets you the Vita version for free, and vice-versa. Both versions also have a shared Trophy roster, and can easily sync their data by just pressing the Square button on the title screen, allowing you to enjoy your Stealth Inc. experience at home and on the go!

While it seems that Stealth Inc. feels most at home on PS3, there isn’t a whole lot of difference on Vita, beyond the portability and the option of navigating the menus with the Touch Screen. Some of the graphics can occasionally feel a little squished and difficult to make out on Vita if your eyesight isn’t great, especially since the Vita build lacks the ability to re-size the screen, unlike on PS3. The Vita controls can also sometimes be a tad stiffer, though it’s barely noticeable. The game plays great on both platforms in the end. 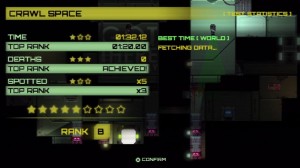 The one noticeable advantage that the Vita version has over its PS3 counterpart is in the level editor, since you can drag and drop objects and the cursor using the Touch Screen on Vita. On PS3, you’re forced to do all this with just the Analog Sticks and buttons.

While it’s appreciated that Curve Studios included a level editor however, it’s sadly not that impressive. The level editing suite is needlessly complicated and difficult to figure out. As if that weren’t enough, you can’t even share custom levels you design, whether locally or online. Well, what’s the point of having a level editor if you can’t share your designs with people?! It’s a huge wasted opportunity!

Thankfully, even if the level editor probably won’t keep you coming back, chasing high scores, finding Helices and earning S-Rankings definitely will! Completing levels under a par time, and without being spotted or killed will net you the coveted S-Ranking, good for both Trophies and unlocking more stages. It’s very difficult to do, especially in Stealth Inc.’s most brutal stages, but like anything else in the game, you’ll feel very accomplished when you pull it off with enough practice!

The game also offers a DLC pack that gives you the downloadable bonus stages from the original PC download, throwing in a few more Trophies to boot. It’s certainly not an essential addition, but for those who want to keep challenging themselves after mastering the main game, it will keep you busy for a little while longer, even if Stealth Inc. sadly lacks a Platinum Trophy to earn. 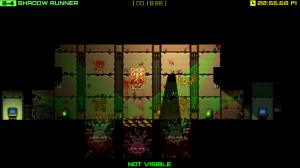 Despite its brutally punishing difficulty, Stealth Inc. is ultimately a superb game, and a very strong offering for PLAY 2013, particularly being a cross-buy title for only $10! Players who are frustrated by constant death and failure might want to bypass this one, but anyone who is up to the challenge will find a very clever, engaging and darkly humourous offering that presents plenty of rewarding gameplay.

As for how it stacks up to its PC original, Stealth Inc.’s refined graphics and controls, as well as its addition of Trophies, make it a noticeable upgrade that’s worth the double-dip for PlayStation gaming fans who already played through Stealth Bastard Deluxe on PC. If you didn’t play the PC version previously, the PlayStation versions improve the experience, however slightly, and to anyone with access to a PS3 and/or a Vita, these versions are currently the most recommendable.

Stealth Inc. is yet another fine example of less being more in a digital download game. It will kill you all kinds of dead, and it will laugh while it does it, but if you’re looking to put both your sneaking and puzzle-solving skills to the test, it’s sublime in all of its creativity and pitch-black charm!

Think you’re up to the challenge? Then try not to leave a mess…