You might think it’d be easy to dismiss Disney’s Planes on Wii U as just another movie tie-in video game. And realistically, you’d be forgiven for making the assumption. What we found when we really dug into the game, though, was more than we ever expected to find.

Timed with the movie’s release, the adaptation of Planes has a bunch of different game modes, each quite different from the next. The whole thing is very reminiscent of Pilotwings, one of our favourite games, and while Planes is no Pilotwings, it’s not too far off.

One of the game’s modes is a balloon popping affair that loses its lustre after the first twenty minutes or so. Unless, of course, you love Pilotwings enough to keep playing. Though, now that we look back, we’re not sure why we didn’t just stop playing this and pick up Pilotwings again.

There’s also some mid-air racing (as you might expect in a game like this) and free flight, both of which are kind of forgettable. 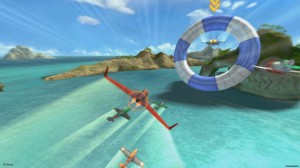 But then we come to the main story. A story in which you play as the seven characters from the film. Each character you control has a set of tasks to complete, like fly through piles of snow or billboards or whatever sort of relates to the character you’re controlling. The variety isn’t really there, but there’s something satisfying about getting through all the piles. Again, Pilotwings probably had a hand in preparing us for this.

Graphics in Planes is nothing to really write home about, though we’re not sure that’s super important for a game targeted towards the pre-teen market. Playability and colours are much more important factors for this age group, and Planes delivers.

Perhaps the only thing about Planes we dreaded more than the fact that it’s a Disney tie-in is the fact that it is a flying game. More often than not, controlling a plane in a video game becomes tedious and strenuous. Luckily, playing the game on Wii U is not anything close to either. Controls are simple enough to get the hang of quickly (nine year olds tend to give up pretty easily). Of course, there’s a downside to this for any more serious gamer that might want a little more precision, but let’s be honest: if you’re playing a flight game and you’re over 16 years old, it isn’t Planes.

The uniqueness of the Wii U isn’t lost on Planes either, as the multiplayer offering pits a GamePad-based player against someone on the television screen. Fine, it’s not a unique use of the GamePad, but it’s better than Pikmin 3‘s off-TV play as its lone GamePad offering.

The game’s developer, Behavior Interactive, managed to make a relatively compelling and worthwhile tie-in movie game. There are a few nags here and there, but considering you get a decent four to six hour story out of the main campaign, as well as some half-decent mini games (okay, they’re throwaways), it’s not all bad.