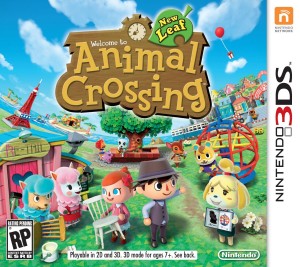 Despite being among the initial wave of first-party 3DS game announcements leading up to the handheld’s first release in 2011, Animal Crossing: New Leaf has taken a very long time to actually reach the North American 3DS game library. The Japanese got the game significantly early after several of their own delays, and it wasn’t until this year that Nintendo’s latest quaint virtual life offering has reached our shores in the West.

Fortunately, the wait was worth it, because New Leaf is far and away the best entry in the series yet!

Okay, this is of course if you’re interested in playing a virtual life game in the first place. While New Leaf implements an ingenious new mechanic that makes you the mayor of your custom, randomly-generated town, the fact remains that it’s still Animal Crossing. You still proceed the entire game with seemingly banal activities like decorating a house, catching fish, or participating in dynamic in-game events with your fellow villagers. As before, these events are more addictive than they have any right to be too!

With that said however, the series is still maintaining some of the same quibbles as it has done since its North American debut on the GameCube. You still get a pathetically limited amount of inventory spaces for example, which is quite annoying, because it only creates more menus to needlessly fumble around. In fact, while the menu layout is pleasant and fun, it’s still a little difficult to navigate where you want to at times. In a game like Animal Crossing that’s all about repetition and constantly pawning off your findings, that can be a nuisance.

Still, it doesn’t change the fact that New Leaf is both a fantastic 3DS game and a superb Animal Crossing sequel to make up for the weaker previous offering, Animal Crossing: City Folk on the Wii. It does depend a little bit on players finding this kind of gameplay appealing in the first place, but if you enjoy the series or more relaxed gaming experiences in general, New Leaf deserves a spot in your 3DS collection! 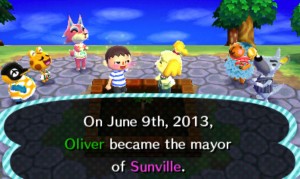 But how does that whole wrinkle of being mayor work in the end, you may ask?

Well, unlike previous games, you are welcomed as mayor upon moving to your town, and from there, your assistant, Isabelle helps you manage various mayoral tasks. The townspeople will contribute requests to how you can improve the town’s geography and functionality for example, and you can also alter a few municipal laws and cause trouble for citizens you don’t like, if you’re the type to abuse your power anyway.

This is how New Leaf so effectively elevates itself above its predecessors. If you don’t like something about your town, then, as the mayor, you have much more authority and means to change it. You can change the time that shops open and close for example, as well as your town flag, what kind of monuments and buildings are placed in and around your town, and all sorts of other things. It gives you more ways to play where you want to play, like never before!

In fact, the only downside to being mayor is that your lazy, cheap citizens are a bit of a hassle to try and please. As with the returning demand of paying off a loan of Bells, the in-game currency, to real estate boss, Tom Nook, you constantly need to earn Bells by selling findings and items to simply do your mayoral duties. You need to pay a deposit every time you make a town motion for example, and it’s not a small deposit! 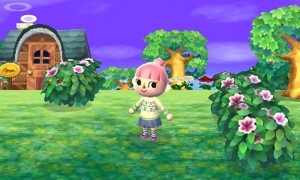 You also need to bankroll most of the construction efforts in your town yourself, since your citizens will almost never contribute most of the funds, even if they’re crying out for some addition to their living space. This is a real pain, because it means constantly having to exploit ways to earn Bells by either continually scrounging up fruit, fish and shells to offload at the local pawn shop, essentially money-grinding. Like a good RPG, maybe the grind is fun for some, but it will be annoying for many players. Why don’t the townspeople contribute more Bells? Hasn’t this little hamlet heard of taxes?

Still, you can’t argue with the appeal of finally being able to modify your town’s basic architecture, which you couldn’t really do in past Animal Crossing games. Not only can you give yourself the kind of house you want to live in (provided you have the income to pay off Tom Nook for building and expansion), but now the very town you want to live in!

The dynamic events will also give you new things to look forward to on varying days. Bug-catching contests. New shop openings. Museum exhibit debuts. There’s always new ways to keep prolonging the fun and appeal of New Leaf, and one of the best parts about the game is that you never run out of things to do! 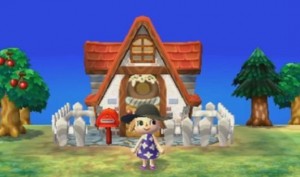 In fact, you can invite your friends directly into your town, create virtual representations of homes and towns for people you StreetPass with, complete with the ability to purchase other people’s furniture, download new promotional items from Nintendo if you visit Nintendo Zone locations on certain occasions, and take screenshots that you can save in your 3DS’s image folder, and share whenever you want, even on Twitter and Facebook. This helps you bring other people into the experience beyond the virtual citizens of your town in a great way, and will only provide more reasons to keep coming back, or perhaps entice your friends to pick up their own copies of the game and play with you.

In fact, if you own a Wii U, there’s even a specialized app on it called Animal Crossing Plaza, where you can interact with both human players and in-game characters, post Miiverse messages about the series and New Leaf more specifically, and hopefully add some new friends to your Animal Crossing circle. If you don’t own a Wii U, this app is not essential to the experience, but it’s yet another way that Nintendo’s aftermarket support of New Leaf has been nothing short of stellar!

Again, if you don’t like Animal Crossing to begin with, New Leaf won’t really convert you, as it’s still much of the same kind of experience, even with all of the numerous refinements and additions to the core formula. If however you don’t mind virtual life games, and have been waiting for a persistent 3DS addiction that will last you for potentially the handheld’s entire life cycle, even considering the looming threat of Pokemon X and Pokemon Y in that regard, then New Leaf is not an experience to be missed!