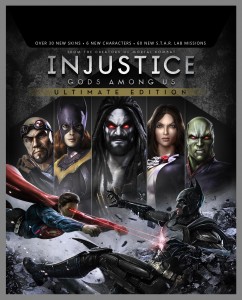 It seems that a previous apparent ‘leak’ on Amazon’s German arm has panned out to a degree. Warner Bros. has just confirmed that this year’s fan-favourite DC Universe-themed fighting game, Injustice: Gods Among Us, will be getting an ‘Ultimate Edition’ that packs in all of the game’s various DLC bonuses. It will also extend the game to more platforms.

Yes, while Xbox 360 and PlayStation 3 editions of Injustice: Gods Among Us – Ultimate Edition are predictable, Warner Bros. doesn’t seem to be planning the re-release for Wii U at this point, despite the standard initial release launching on Wii U simultaneously with its Xbox 360 and PlayStation 3 siblings. Despite this, the Wii U version didn’t receive DLC functionality until July, months after DLC fighters, costumes and S.T.A.R. Labs missions had already been made available on Microsoft’s and Sony’s consoles. Even then, the two most recent DLC fighters, Martian Manhunter and Zatanna, still remain inaccessible in Injustice’s Wii U version.

The Wii U version of the game also lacks the ability to connect and earn bonuses from the tie-in Injustice game on iPhone and iPad. Developer, Netherrealm Studios has provided some workarounds for this however, allowing Wii U players to exclusively download some of the bonus costumes awarded for playing the mobile game separately, via the Wii U eShop.

On the bright side, Injustice: Gods Among Us – Ultimate Edition will not only be releasing on Xbox 360 and PlayStation 3, but also PlayStation Vita and PC, as was rumoured. Not only that, but it will also arrive on PlayStation 4 to boot, and will be a launch title. That has to be a happy surprise for DC fans who have yet to invest in the game, and plan to buy a PlayStation 4 in November!

Unfortunately, it doesn’t seem like Injustice: Gods Among Us – Ultimate Edition is planned for Xbox One. This could be because of WB’s recent renewal of their exclusive content partnership with Sony, which previously led to exclusive play modes, motion controls and challenge maps in the PlayStation 3 version of Batman: Arkham Asylum, and gave Sony Online Entertainment the exclusive rights to popular MMORPG, DC Universe Online, only making it available on PlayStation 3 outside of the obligatory PC release. The renewed partnership will bring at least several exclusive costumes to the PlayStation 3 version of Batman: Arkham Origins as well, launching in a couple of weeks.

While the re-release’s PC version still seems to be being handled by Netherrealm Studios at this point, the PlayStation 4 version is instead being put together by High Voltage Software, best known for The Conduit and its sequel on Wii. The PlayStation Vita version meanwhile is being developed by Armature Studio, founded by several ex-employees of Nintendo-owned developer, Retro Studios. Armature has already been hired by WB to develop upcoming sibling game, Batman: Arkham Origins – Blackgate on 3DS and Vita, likely indicating that the DC parent was pleased with the developer’s work on that game.

Sony has confirmed that while the PlayStation 3 re-release will be identical to the original release beyond being packed with all of the DLC, the PlayStation 4 version will support exclusive touch pad functionality via the Dual Shock 4 controller, and will also support home sharing and streaming. That’s sure to be a big incentive for competitive players in particular! This version can also link to your PlayStation Network feed from the pause menu and between match-ups, so it certainly seems like High Voltage Software is doing everything they can to optimize the game for next-gen hardware. 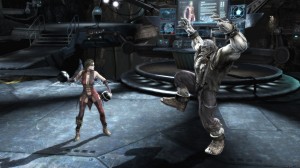 The PlayStation Vita version meanwhile has been promised to run at the same 60fps, boasting much of the same visual fidelity as the PlayStation 3 version. It will also include exclusive touch controls in both Story Mode minigames and some of the S.T.A.R. Labs missions, according to Sony.

Those who have yet to purchase the game will probably find the combination of portable and next-gen variations is a compelling way to sway them off of the fence! Not only will these versions come with all of the bonus fighters, costumes and missions that have been made available as DLC up to this point, on top of the exclusive features on PlayStation 4 and Vita, but they will also come packaged with the entire game soundtrack for North American players. That’s mighty generous!

Eggplante will continue to deliver you all of your Injustice news, as it swoops down to us!