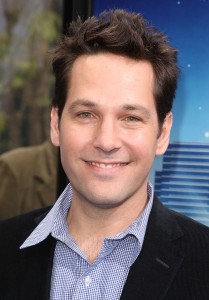 Marvel Studios appears to have selected its size-changing superhero for their Phase Three kick-off movie, Ant-Man!

After the news was broken by The Wrap and Variety, multiple sources have confirmed that I Love You, Man and This is Forty star, Paul Rudd has indeed been selected for the part of Hank Pym, a.k.a. Ant-Man, and has entered negotiations with the studio! This marks the first official casting and character confirmation for Ant-Man, which Marvel Studios has been strangely silent about, given that it was even moved up several months from a planned November 2015 release to a July 2015 release, yet doesn’t even have a cast yet, let alone started filming!

There’s still time for Rudd to suddenly walk away if he doesn’t like Marvel’s terms, but given the guaranteed career boost he would no doubt get from playing a Marvel superhero, it’s doubtful that he would, especially after being handpicked by the studio. Given that Rudd’s involvement has already been rumoured for a while now, he’s clearly expressed a keen interest in playing the character to somebody as well.

Rudd’s background in comedy and epic drama makes him a smart choice for director, Edgar Wright’s vision for the title character in Ant-Man. The movie was originally planned to incorporate both original Ant-Man, Hank Pym, and his successor, Scott Lang in a team-up effort, but, given the movie’s heavy re-tooling and restructuring so it can fit into the modern Marvel Cinematic Universe, this is likely no longer the scenario. It appears that Rudd is merely playing Hank Pym, and will headline the movie exclusively for the time being.

You can catch Rudd’s latest movie this Holiday, Anchorman 2: The Legend Continues, where he reprises his role as smooth-talking field reporter, Brian Fantana.

Ant-Man meanwhile will come to theatres on July 31st, 2015. Be sure to keep targeting Eggplante for all of your news related to Ant-Man, and the Marvel Cinematic Universe at large!