After skipping January, Nintendo’s first Nintendo Direct presentation of 2014 comes with a lengthier and meatier broadcast, effectively detailing the Big N’s many promising 3DS and Wii U titles for the first half of the year.

There were some exciting new announcements related to games we already knew about, some cool surprises on the docket for the 3DS eShop in particular, and a handful of release dates for the anticipated games of Nintendo’s early 2014 slate. All in all, it was a fun and healthy Direct with plenty to say!

As usual, if you missed the broadcast, or just want a recap of the highlights, we’ve got all of the news and announcements out of this Direct that you need to know! There’s even more to cover than usual, so let’s get started! 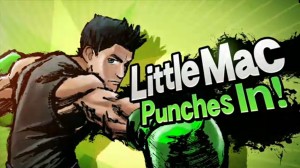 Normally, Nintendo saves the latest round of coverage for the upcoming Super Smash Bros. games in development for 3DS and Wii U until last, but this time, they made their obligatory announcement early. Once again, an all-new character was revealed to be joining the roster, in this case, Punch Out!!’s Little Mac!

Formerly an Assist Trophy in the previous Super Smash Bros. Brawl for Wii, Little Mac’s appearance and moveset was demonstrated, including his Final Smash move that will see him turn into a huge, monstrous version of himself! Mac is also apparently able to build up his power meter to unleash stronger attacks during bouts, just like the Punch Out!! games. All the while, Mac is encouraged on by his trainer, Doc Louis as the trailer shows him off.

The character seems to be a natural fit for the game, and was perhaps always one of the most obvious choices for a new Nintendo challenger.

The trailer was also accompanied by montages of sharp, Japanese-inspired, cel-shaded manga art, and it certainly made for a big entrance for Punch Out!!’s underdog protagonist! The reveal even came with a nifty orchestral remix of Little Mac’s training theme song from the original NES game, which was sure to have fans rabid with excitement!

Unfortunately, the games’ release dates were still simply listed afterward as sometime in 2014, with no specific window. 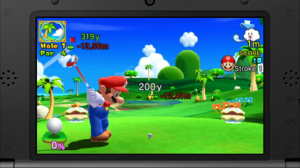 Mario Golf: World Tour was up next, which was a welcome relief, as this delayed 3DS game has received a disappointing lack of press lately.

Fortunately, the new Direct detailed a new single-player mode for the game, Castle Club, which allows players to use their Mii’s to train and improve their skills, as well as compete in tournaments against the A.I. The Mii’s can be further customized with various sets of unique equipment that is sold in the Castle Club’s shop, not just aesthetically, but also in ways that affect the power, accuracy and control behind their golf shots.

As players rise through the ranks of Castle Club, they are able to participate in more prestigious tournaments with presumably greater rewards. The training ranges can also help players improve putting, approaches and anything else they may be struggling with. All in all, it seems like a pretty robust and enjoyable play mode, especially when you can thereafter put your skills to the test against online opponents across the world!

Best of all however was the confirmation of the game’s revised release date, which is May 2nd of this year. Finally, Mario Golf fans can mark on their calendars the day that they can enjoy this series’ promising 3DS debut! 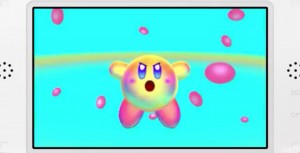 Making an inevitable appearance next was Kirby: Triple Deluxe, the debut of Nintendo’s pink puffball on the 3DS. First up was a demonstration of how Kirby’s abilities are multi-purpose in the new game, with examples of button combinations being shown to affect the nature of Kirby’s attacks with the Horn ability, ranging from a forward dash to a back drop, and even to impaling enemies on the horn and carrying them with Kirby. Yikes!

StreetPass features were the focus of this new coverage however, primarily demonstrating how the game features collectible key chains inspired by vintage Kirby sprites in the series’ earliest Game Boy and NES titles. It was also teased that an in-game collectible, Sun Stones would give players a, “Special reward” if they were all found. A hidden final area or final boss? If Kirby’s Dream Land 2 and Kirby 64: The Crystal Shards are any indication, that’s entirely possible!

In any case, when you StreetPass with other players, you can exchange key chains to increase your collection of vintage Kirby character designs. Collecting StreetPass tags from other people, regardless of whether or not they own the game, will also cause Waddle Dee’s that appear at set points throughout each stage to give Kirby progressively better support items. Obviously however, key chains can only be collected and shared with people who own Kirby: Triple Deluxe.

Lastly, the game’s release date was officially confirmed as May 2nd of this year, sharing the release day with Mario Golf: World Tour. Kirby: Triple Deluxe looks extremely impressive though, and it looks like Nintendo fans have plenty of reasons to invest in both games, come May!