Another very cool surprise announcement for the 3DS eShop came from Rusty’s Real Deal Baseball, which is a minigame collection that allows players to play minigames that are meant to inspire the, “Good feelings” of baseball. Essentially, it’s a game designed simply to make players feel happy and triumphant, as only Nintendo can deliver!

How this game works is, players visit an in-game shop, Rusty Slugger’s Sports Shack, owned and operated by ex-pro baseball player (and anthromorphic dog, apparently), Rusty Slugger, and buy minigames. These minigames are meant to replicate the good feelings of baseball, including the feeling of hitting balls, catching pop flies, pitching through targets, and even making calls as an umpire! The games apparently take place in game-within-a-game cartridges, complete with mock title screens. They’re apparently made by ‘Nontendo’ too. Cute.

The minigame must heavily detailed was Bat & Switch, which has players knock baseballs as they’re tossed to their Mii, sometimes into flying U.F.O.’s! This is meant to reproduce the vibe of a baseball experience that wouldn’t be possible in the more strategic and grounded baseball sims such as Sony’s MLB: The Show games.

Other minigames shown in passing were Cage Match, which has players knocking balls at a machine in a batting cage, Feel the Glove, which tasks players with catching heaps of bunts, and Make the Call is, naturally, an umpiring game, where players decide on calling ‘Strike’ or ‘Ball’ with the stylus.

Rusty’s Real Deal Baseball is yet another experimental title that spearheads a very cool new market initiative and potential trend for Nintendo. You see, when players download the game for free (yes, this is also a cool new application of free-to-play), they’re only given a single minigame, Bat & Switch. When players perform well in this minigame, they are offered the chance to purchase more from Rusty, essentially making the game a free-to-play minigame collection.

But there’s more, and here’s the best part! If you perform well in Bat & Switch, and this presumably applies to other minigames too, you’ll get unique items. How these are used is, when you want to buy a minigame from Rusty, he’ll give you a base price of your real 3DS eShop money, BUT, players can opt to haggle with him! If you offer Rusty the items you’ve earned by performing well in the minigames, on top of improving his mood by listening to his programs, likely about his former baseball exploits, there’s a chance that you can get Rusty to reduce the real-money price for new minigames from their base $4.00 price, each.

Yes, players have some degree of control over what they pay in real life, with their actual 3DS eShop funds, thanks to a smart system that avoids easily being taken advantage of, but isn’t constantly throwing up pay walls, nor pitting the players’ patience against their wallets, as most free-to-play games are often guilty of doing.

So, to recap, with this brilliant experiment, Nintendo is not only cleaning up the mess of toxic hack mobile developers who have ruined the idea of free-to-play on smartphones and tablets (and sadly bled their microtransaction-based greed into a few $60 console offerings, worst of all), but is, in the process, proving that the 3DS remains the superior platform with which to take reliable pocket game experiences on the go, by offering the superior and more revolutionary product. Well done.

Nintendo just beat the mobile market at its own game with the announcement of Rusty’s Real Deal Baseball, proving that the free-to-play model still has viable applications, and publishers that are willing to make good use out of them, by creating an honest free-to-play game that engenders customer goodwill, and in turn turns that goodwill into money. That is how free-to-play games should work!

Hopefully this promising trend is noticed and replicated in other free-to-play games to come. Regardless, Nintendo confirmed afterward that the game is coming to the 3DS eShop sometime in April. 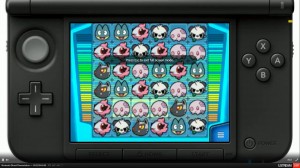 On the more established and less experimental side of things, another surprise announcement for the 3DS eShop during this Direct was Pokemon Battle Trozei!, a sequel to DS puzzler spin-off, Pokemon Trozei!. The match-three puzzler incorporates the entire Pokemon roster, from the earliest monsters in Pokemon Red Version and Pokemon Blue Version, to the most recent monsters of Pokemon X and Pokemon Y, with players battling monsters in puzzle combat, and capturing the monsters they defeat.

As you continue to use certain pokemon in your puzzle bouts, you will form bonds with them that make them more effective against your opponents. The type-advantage chart from the mainline Pokemon games will also be incorporated, increasing or decreasing damage against certain opponents as you match certain pokemon.

Pokemon Battle Trozei! also features a co-op mode, presumably just a local one given the illustration, where up to four players can team up in co-operative play against the game’s tougher opponents. All in all, it seems like the cherry on top of a pretty robust package, particularly for a 3DS eShop game!