GLaDOS sure loves her experimentation, but if there’s one experiment that Portal fans likely wouldn’t anticipate, it’s an entrance into the world of board games!

Thanks to a collaboration with popular tabletop game company, Cryptozoic however, Valve intends to bring the eccentric world of Aperture Science beyond your monitor. The board game has been kicked around internally since 2012 apparently, but will finally be coming to hobby shops (and likely Gamestop/EB Games stores) everywhere towards the end of this year.

Portal: Uncooperative Cake Acquisition Game, as it will be called, is a game where two to four players compete against each other in a series of tabletop test chambers, making use of a tilting board. The game will feature test subjects, sentry turrets, companion cubes, and, naturally, cake, all key elements of Portal in its original video game incarnation. Unfortunately, there’s no confirmation that GLaDOS will play any part in the board game at this time, even if it’s probably at least likely that she’ll be writing the instruction manual. 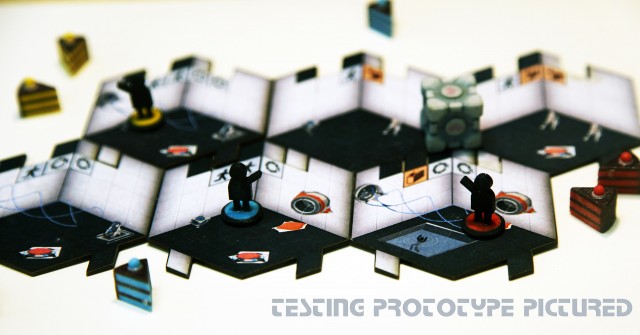 The board game’s first public demonstration was recently held at the American International Toy Fair. Valve asserts that the board game is not meant to be taken as a promotional tool for the games, and is simply a way to expand the range of the Portal brand. They state that the game will undeniably appeal to established fans of the Portal video games, but was ultimately designed to be entertaining for people who have never even heard of Portal before, demanding no previous knowledge of the video games to play the board game.

Originating as a student game project called Narbacular Drop, Portal was eventually adopted by Valve and re-tooled for a release as a bonus extra in compilation game, The Orange Box for PC, Xbox 360 and PlayStation 3. The original Portal game proved to be a massive surprise hit amongst gamers for its ingenious physics-defying puzzle gameplay and dark sense of humour, as well as its loveably sinister A.I. villain, GLaDOS, ultimately proving to be the highlight of the compilation.

A sequel, Portal 2 was then released as a full retail package, also for PC, Xbox 360 and PlayStation 3, and marked Valve burying the hatchet with Sony after a rocky relationship that resulted from the poor quality of the PlayStation 3 port of The Orange Box, also leading to the two highly popular Left 4 Dead games skipping a PlayStation 3 release to only come to PC and Xbox 360. To commemorate the reconciliation, Portal 2’s PlayStation 3 edition contained several bonus features, including a free copy of the game’s PC version that supported cross-saving, as well as retroactively added PlayStation Move support and an exclusive DLC expansion.

Would you play a Portal board game? Would you rather Valve just left the brand in the gaming space and got to work on Portal 3? Do you think this board game will be good? As usual, your comments are welcome below.

Portal: Uncooperative Cake Acquisition Game is expected to retail for $49.99, sometime this Fall.

Eggplante will continue to probe your Portal updates, as they’re phased to us.