Nintendo has a very generous offer in place for would-be purchasers of Mario Kart 8, the latest offering in the massively popular racing game franchise!

Anyone who buys and registers a copy of the game on Club Nintendo before July 31st of this year, regardless of whether it’s bought at retail or downloaded digitally from the Wii U eShop, will be able to choose a free additional Wii U game to be downloaded from a list of four. That’s a $50-$60 value, folks!

Registering for Club Nintendo is easy and completely free, and can be simply done via Nintendo’s website. Every Nintendo-made retail copy of a 3DS or Wii U game, along with a good chunk of high-profile third-party games on those platforms, all come with packaged codes that can be redeemed on your Club Nintendo account for ‘coins’. These coins can be redeemed for merchandise and/or a small selection of Virtual Console and eShop games that cycle every month. Digital copies are automatically registered on your Club Nintendo account, so long as you link it with your Nintendo eShop account, which should now be automatically linked to your Nintendo Network ID.

Anyhow, the four free games on offer are: New Super Mario Bros. U, Pikmin 3, The Legend of Zelda: The Wind Waker HD, and Wii Party U.

Strangely, European territories get to choose from a whole lost of ten games, instead of just four. Along with North America’s four, they’ll also be able to pick from: Nintendo Land, Monster Hunter 3 Ultimate, Game & Wario, The Wonderful 101, Sonic: Lost World, and Mario & Sonic at the Sochi 2014 Olympic Winter Games.

Needless to say, this is a very easy freebie that Wii U owners can snag. There are no disadvantages to having a Club Nintendo account anyhow, as every Nintendo game you buy and register can net you free goodies, at no extra charge or inconvenience.

Mario Kart 8 comes exclusively to Wii U on May 30th. It will feature the introduction of gravity-defying tracks, hovercrafts, the overdue ability to finally destroy those pesky spiny shells, and the introduction of Bowser’s Koopalings as playable characters. Naturally, a huge selection of new and old tracks will be featured to race on, as with all of the recent Mario Kart games. Nintendo also recently revealed that the game will allow players to share play footage online, allowing it to be uploaded directly to YouTube, something that the competing PlayStation 4 and Xbox One can’t even do in their own games as of this point.

A Mario Kart 8-themed Wii U console bundle is also set to release on May 30th, for $329.99. It packs in a 32GB Wii U console, a physical copy of Mario Kart 8, and both a red Wii Wheel and Wii Remote Plus. The free game promotion can still be taken advantage of if you register the copy of the game that comes in said bundle.

Eggplante will race you your updates on Mario Kart and any high-profile Nintendo promotions, as they drift to us. 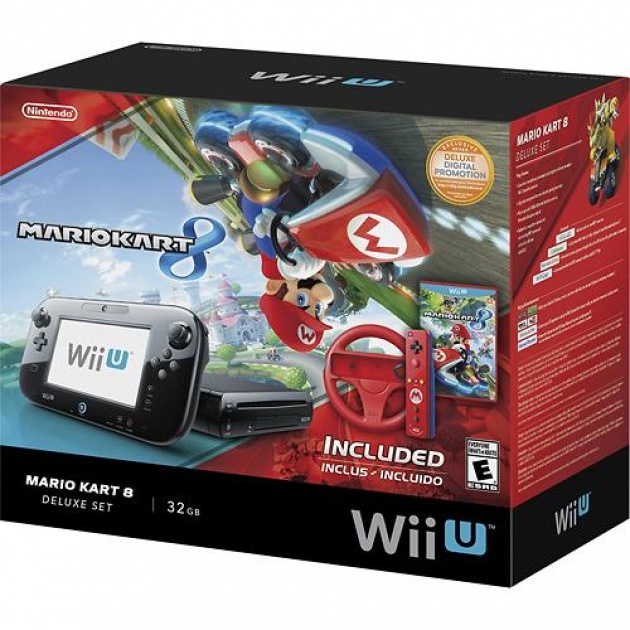