When a game gets teased and is specifically announced to be in “pre-alpha” stage, you shouldn’t expect it to be playable moments later. And of course, we didn’t. But Ubisoft likes to do things a little differently.

During our Ubisoft booth tour, we met Jen, community developer for Rainbow Six Siege. She joined the Rainbow Six team about a year and a half ago, just after the team decided to reboot the franchise after Rainbow Six: Patriots development stalled.

The main focus is putting multiplayer first. Rainbow Six, after all, is a team-based, tactical shooter, set in a mainly indoor environment. Rainbow leads the assault, while the enemies counter, and in Siege, you can play both sides of the story.

Our small group got to first witness, then play a five-on-five multiplayer match. As the attackers, we began the stage scouting with our drones. Able to communicate via headsets, the game somehow instantly makes you feel like a SWAT Team Commander, calling out where you find traps, reinforced walls, and enemies. All the while, the hostage-takers are laying mines, barbed wire, barricading windows and doors, and hiding behind cover, awaiting your breach.

Then the game gets really fun. As the attacker, you can rappel in a window, blast through a door, sneak around the back, or go in through the garage. Any white wall can be destroyed. There are no pre-set destruction points, and no pre-set paths directing you. There’s a feeling that this is the way SWAT Teams really work. 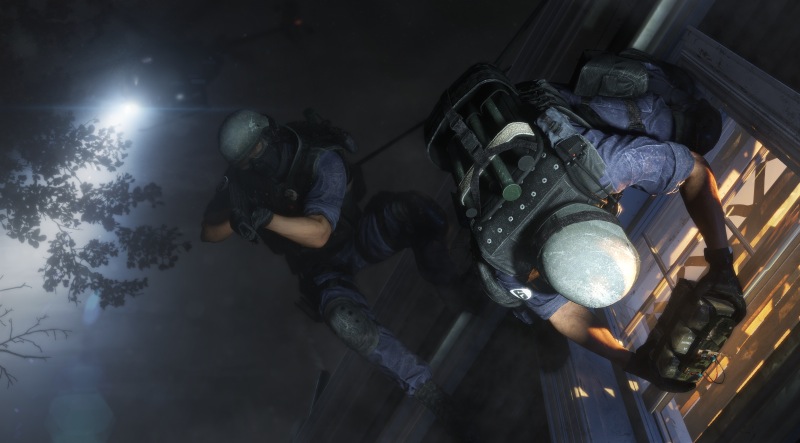 There is a timer involved that sets the game to a pre-defined limit, and that is to the advantage of the hostage-takers, though we’re not sure that’s the right path. In real life, there is no time limit on these kinds of things, though you could argue that offenders wouldn’t be the most patient bunch. Just keep in mind that this stuff is all very much pre-Alpha.

When on the defensive side, the game begins with you inside the house (the only level we were able to play), giving you the ability to barricade walls, windows, and doors, while setting traps like barbed wire and mines. You can also shoot out the tiny drones if you see them making their way through the house.

Inside the house, you’ve taken control of the security system, which means you have access to all the internal cameras, which helps get a different vantage point when the team is about to breach.

The entire package of Rainbow Six Siege‘s multiplayer is much larger than the small slice we got to play, but if it is any indication as to the strength of the ideas behind the gameplay direction and fun that is to be had, Siege is definitely on the right track.

Rainbow Six Siege will come to next-gen consoles and PC in 2015.