As we wrapped E3 2014, we posted our exclusive interview with Mr. Eiji Aonuma, director and producer of The Legend of Zelda. We were also fortunate enough to interview Mr. Hisashi Koinuma and Mr. Yosuke Hayashi, the executive producer and producer of Hyrule Warriors, respectively.

We immediately jumped into the good stuff:

Hayashi: So the base system for the game is a Dynasty Warriors system, and the series is all about having fun action that’s easy to get into. Players can just jump in there and start having a lot of fun. Zelda isn’t known for the action side of things and there are not a whole lot of characters that players will play as. But putting that into the Dynasty Warriors style, we’re giving players the chance to see a different way to experience Zelda with being able to play as a lot of characters and being able to do this really action-oriented gameplay.

Aonuma: Using a sword to fight has been a very fundamental, very basic part of the Zelda franchise experience. But this time, you have enemies. Lots and lots of enemies! You’ve always had enemies, but this time you have lots and lots of them. So in merging these two franchises, there’s been this awesome chemical reaction that I think we’ve been able to create an experience that maybe players didn’t know that they wanted but once they have it, they’ll really enjoy it. I certainly do want to take what I’ve learned from this experience and execution and take that into my next project.

Eggplante: In the demo, there’s Link and Impa playable, but there are another five or six slots that are there. Is there going to be a possibility of playing as enemy characters?

Hayashi: The Dynasty Warriors series has always had stories that have been told from different perspectives. Including villains. So, we can’t say officially that there will be there. But maybe that’s something you look forward to in the future.

Eggplante: Fair enough! I imagine you have some pretty crazy ideas that you want to try. Is there ever any trepidation in bringing any of these ideas to Mr. Aonuma or the team at Nintendo thinking maybe they’ll think you’re too crazy?

Koinuma: When you hear that Mr. Aonuma is the supervisor, you probably think that he’s the person in there saying, “you can’t do this, this is how you do things, blah blah.” But it wasn’t like that at all. We’re inside here as Zelda fans thinking to ourselves, “this is what Zelda has to be like.” So we would bring our ideas to Mr. Aonuma, and he would say, “no, break out of that, think of other things, that’s okay!” So we were trying to put the brakes on ourselves, and we were the ones trying to gun the gas. It wasn’t just a license check, it was really a collaboration. Having that kind of collaboration really makes Hyrule Warriors as fun as it is.

We were actually the most scared and the most nervous right before the Nintendo Direct when the game was unveiled. We were really scared of the reactions from Zelda fans. But that was also pretty positive, so we were okay.

Eggplante: On the other side, do you [Mr. Aonuma] ever feel like you want to say no to anything that you just can’t break? Is there one convention of Zelda that can’t be changed because that’s just the way it is?

Aonuma: Within the experience that Mr. Hayashi has been working with me on this project, never once has he been told that he has to stay true to a specific aspect of Zelda. So the fact that I have never said that and can’t voice it now means maybe there isn’t.

Hayashi: From our end, on the Koei side, we have other collaborations and titles with other property holders, but this is the first time that we’ve ever had an IP holder be as open and as free in discussion.

Aonuma: Oh! I remembered! When we were talking, I remember saying, “make a Zelda that I can not make.” That was the only rule.

Eggplante: Interesting, so there are Zeldas that you can not make.

Aonuma: [points to Hyrule Warriors poster] Yes! This one!

Eggplante: So, on a technical side, is there too much going on? Zelda tends to be a smoother, slower-paced, one sword slash at a time kind of game. Hyrule Warriors puts dozens, if not hundreds of enemies on screen at a time, a lot of animation, a lot of effects. What kinds of challenges are those that you face?

Koinuma: There’s not really any tech issues. The things that we were facing were actually character-related or world-related. You don’t have this image of Link jumping up, for example. It seems like it should be slower or he should have both feet on the ground, and so trying to figure out an action that would still be within his character, or within the characters, that was the challenge. Making a bunch of animations that look like they would work in Zelda put in here just don’t work quite right. As Mr. Aonuma was saying before, he wanted to make a Link that he couldn’t make. And so we had the freedom to go a little more over the top. So now you have Link throwing tons of bombs and really giving that sort of fun action experience that Dynasty Warriors as a series offers. We have actions that are homages to the actions that you would do in a Zelda game, but they’re more over the top or they’re faster or they’re crazier. In the final stages, as we finalize the game, they’ll probably be even crazier once they’re in the final product.

Hayashi: The Dynasty Warriors game is about controlling a battlefield with lots of areas. But if you put in the ability to jump around, that kind of breaks the game for how you’re going to take over this area. That being said, there are ways of travelling to get the player from here to here, and we want to offer the player a certain amount of freedom to think how they’re going to get from point A to point B. And we want to let them have fun doing that in different ways. That kind of freedom and that kind of gameplay is in there.

Koinuma: The Zelda series is known about having fun with actions, whether that’s movement or action or puzzles. Dynasty Warriors is more about how to defeat the enemies and how to take control of the battlefield. So we’ve focused on that aspect of gameplay, so there’s not the emphasis on the different kinds of actions you can do. 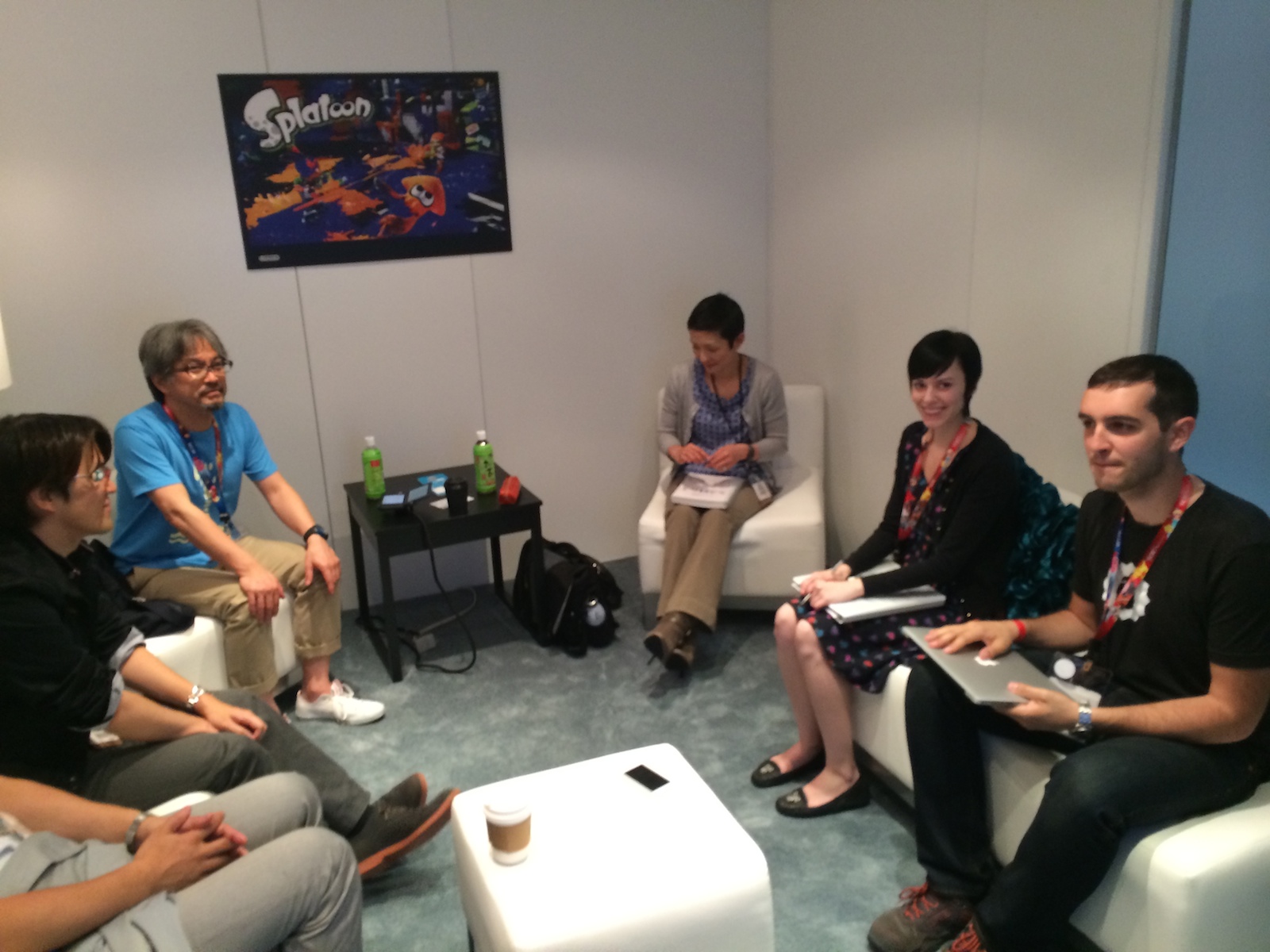 Eggplante: Every Zelda has a different art style. The story can be similar, but the art style is always very different. How did you decide on the art style for Hyrule Warriors and why didn’t you do something like Skyward Sword or The Wind Waker, for example?

Koinuma: I guess you could say this is just the art style that was created by a bunch of Zelda fans thinking about what kind of art they would like to see. They obviously looked at a bunch of different art styles, but when you’re thinking about the gameplay, you have that thrill of one versus a thousand, you need an art style that works with that kind of a system. So you’re looking at a more realistic look for things, but there should be some tweaks to that realism to make it a little more deformed and not exactly real. So we think from that way of thinking, it became that kind of Twilight Princess kind of look. But really, it was what the staff thinking about the gameplay, what kind of art would work with it, and what kind of art Zelda fans would like to see.

Eggplante: How does the Wii U GamePad factor into the game?

Koinuma: Dynasty Warriors has always had split-screen co-op, but now that we have a screen on the GamePad, we’ve moved that to the GamePad. So now each player has a full screen. We hope that parents can play with their kids and siblings can play with each other, and just have a really fun time with the full screen image as it is.

Eggplante: So, as we have to wrap up, I’d like to ask each of you what your favourite game is that you’ve worked on.

Koinuma: It’s really tough to pick one. I love them all. If you can’t love the project that you’re on, you probably shouldn’t be making games. You probably wouldn’t be able to complete the game.

For Mr. Aonuma’s answer, check out our interview with him right here!

We’d like to thank Mr. Koinuma and Mr. Hayashi, as well as Mr. Aonuma, for their time and making a fantastic-looking game set in one of our favourite universes!