After a month of negotiating with Sony to see a revival of Community, the cult comedy series that NBC recently cancelled, Hulu has unfortunately passed on the show. 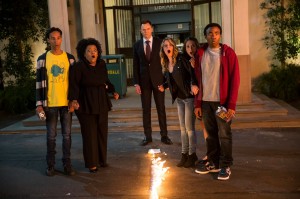 This means trouble for the prophecy of six seasons and a movie, as the cast’s contract options all expire on June 30th, just days from now. Sony however remains committed to the show, and may have an alternate plan, now that Hulu has passed. If they do however, they’ll have to get it together quickly!

Series creator, Dan Harmon, who was infamously fired as showrunner during the show’s fourth season, only to be brought back for the fifth and apparently final season by NBC, has claimed that, if the show is not rescued successfully, an asteroid has obliterated the world, and that is apparently canon. Well, at least we have a definitive ending in that case.

Regardless, Community’s dire straits are rather unfortunate, as the show has been critically acclaimed, and its cult following of viewers is extremely devout, resulting in internet memes and a line of apparel, among other things. Unfortunately however, the show has consistently struggled to generate ratings for NBC, especially in the long-term, which ultimately led to it being axed one season shy of its teased six. Its simple premise involves a group of community college students in the fictional town of Greendale, Colorado, though the show itself has given way to all manner of unexpected, wacky and well-received shenanigans.

Is this truly the end for Greendale’s alumini? Hopefully not. If it is however, you can nonetheless enjoy the show’s entire run to date on DVD, as well as streaming services like Netflix and, yes, Hulu.

Regardless, Eggplante will be sure to report on any potential news of Community’s return, so stay vigilant and hopeful, Greendalers!