Pokemon X and Pokemon Y, last year’s top-selling Nintendo 3DS blockbusters, have just hit a milestone, surpassing 100 million GTS Pokemon trades. In celebration of the occasion, Nintendo and developer, Game Freak are offering an exclusive ‘Fancy Pattern’ Vivillon for a limited time to anyone who owns either game.

Fancy Pattern Vivillon can’t be caught in the wild, and can’t be found anywhere else in the games either. While the Pokemon, Vivillon has a whole host of unique, region-specific patterns, based on where a player lives in the real world, there will be no other way to get ahold of this specific pattern without redeeming this free gift Pokemon, while the promotion lasts.

To get Fancy Pattern Vivillon, simply boot up your copy of Pokemon X and/or Pokemon Y, select ‘Mystery Gift’ in the game’s main menu that follows the title screen, then simply say ‘Receive Gift’ from online, via Nintendo Network. From there, go into your game and pick up the bonus Pokemon from the delivery person in any Pokemon Center across the Kalos Region. It’s that easy! 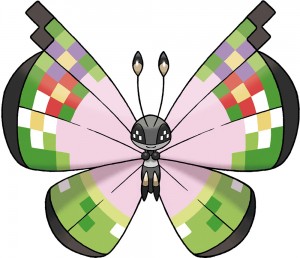 Pokemon X and Pokemon Y have collectively sold almost 12 million copies worldwide, not only easily making them 2013’s best-selling 3DS games, but among the best-selling games on the entire handheld, period! Nintendo will follow these games up with anticipated 3DS remakes, Pokemon Omega Ruby and Pokemon Alpha Sapphire on November 21st of this year, in all regions worldwide, except for Europe, who will see the games on November 28th instead.

Eggplante will keep catching your news and updates related to the Pokemon series.