Disappointed that Godzilla didn’t square off with any of his established foes in this past May’s Hollywood reboot movie? Well, it appears that you’re in luck!

Director, Gareth Edwards delivered a video message at the Legendary panel during this year’s Comic-Con to tease three new candidates for the sequels to his Godzilla reboot. Replicating old-school-style footage from Monarch, the organization that studied Godzilla and the M.U.T.O.’s in this year’s reboot, three monsters flashed on screen:

The three teases were then followed by one of Ken Watanabe’s most famous lines from the reboot in big letters: LET THEM FIGHT! 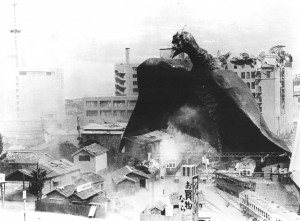 Edwards clarified that, while there were plans in place for all three monsters, it didn’t necessarily mean that all of them would show up in the planned Godzilla sequel that Warner Bros. has already green-lit. Some may be saved for the third installment in Edwards’ planned trilogy. Even so, it’s very exciting to have confirmation that we can finally see Hollywood versions of Godzilla’s classic foes, following the re-telling of his origin story!

Rodan is a flying, pterodactyl-like monster that debuted in his own 1956 Japanese monster movie, Rodan, before crossing over into Toho’s hugely successful Godzilla franchise. While Rodan began as an enemy to Godzilla, he later serves as an ally. It’s unknown if Rodan will be fighting with or against Godzilla in Edwards’ movies however, though the latter is certainly more likely, given the words that ended the teaser.

Mothra is one of Godzilla’s most 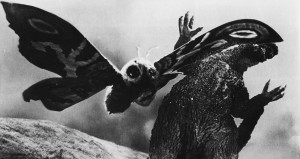 well-known antagonists, even in the West. The huge, moth-like monster also debuted in her own independent Toho film, 1961’s Mothra, but ever since, she has remained Toho’s second most popular monster, only behind Godzilla himself. Mothra has only rarely been an ally to the King of the Monsters.

King Ghidorah yet again debuted in his own independent Toho movie, 1964’s Ghidorah, the Three-Headed Monster. He is a massive, armless three-headed dragon, and was actually fought by the combined likes of Godzilla, Mothra and Rodan during his debut appearance. It’s possible then that the second Godzilla movie may feature Mothra and Rodan as antagonists, with a buildup to Ghidorah as an antagonist that all the monsters must team up and fight in the third movie. 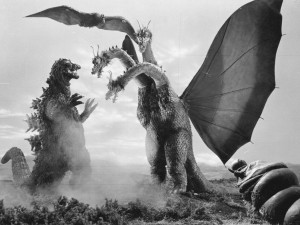 Whatever the case, any one of these monsters would be an absolute delight to see on the big screen! The thought of all of them together is even better!

The only mite of bad news here came from the predictable confirmation that Edwards would not be shooting the second Godzilla movie until he finished his commitment to his Star Wars spin-off, which is due for release in 2016. This means that the next Godzilla movie won’t hit theatres until 2017 at the earliest. Bummer.

If you missed our review of this past May’s Godzilla reboot, we were quite fond of it, declaring it an effective and surprisingly dramatic slow burn thriller that had no shortage of spectacle, and restarted an Americanization of the Godzilla franchise on the right foot.

Keep stomping back to Eggplante for all of your news and updates on the Godzilla movies.