Crytek has just announced that their recent Xbox One game, Ryse: Son of Rome is coming to PC. Both retail and digital PC editions will be offered for the game this Fall.

The PC version of the game will come bundled with all of the DLC that has previously been offered for the game’s original Xbox One release. This means that the Colosseum Pack, Mars’ Chosen Pack, Duel of Fates Pack, and Morituri Pack will be packaged with the game for free, along with the “Ruins” multiplayer map, and the “Legionnaire’s Trust” sword. Crytek has also confirmed that the game will support 4K resolution on PC.

While Microsoft published the original Xbox One version of the game, Crytek will be self-publishing the PC version of Ryse: Son of Rome digitally, enlisting Deep Silver to publish the PC build’s retail package.

Ryse: Son of Rome is following the lead of Dead Rising 3 and LocoCycle, both former Xbox One launch exclusives themselves, which ended up receiving a belated PC release, and even an Xbox 360 release in the case of LocoCycle. LocoCycle’s belated PC and Xbox 360 ports are already available, along with a permanent price reduction of the Xbox One version to $9.99, though Dead Rising 3 won’t come to PC until this Fall.

We reviewed Ryse: Son of Rome during the Xbox One launch season, and were a bit underwhelmed by it. While it was gorgeous and had a few solid bits of action, the game was ultimately too passive and shallow to effectively engage, and was very guilty of some superfluous and greedy microtransactions that had no business being in the game. Hopefully, the PC version improves the experience a bit. 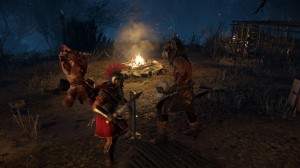 Crytek was recently believed to be under financial duress, with employees apparently having to be let go en masse, and not being paid on time. While the reports appear to be rather exaggerated at this point, Crytek was forced to part with the Homefront IP that they acquired from THQ, along with all development assets for the series’ new open-world offering, Homefront: The Revolution, to recoup expenses, which they ended up selling to Deep Silver. This sales arrangement may also explain why Deep Silver is assisting with publishing duties for Ryse: Son of Rome on PC.

Keep charging Eggplante for all news and updates related to Ryse, and Crytek’s gaming efforts.