Nintendo and The Pokemon Company have just opened PokemonCenter.com, an online store dedicated to all sorts of cool Pokemon-themed merchandise! To commemorate the occasion, they’ll be offering another super special Vivillon to owners of Pokemon X and Pokemon Y, after the ‘Fancy Pattern Vivillon’ that was offered via Mystery Gift in celebration of 100 million completed GTS trades just recently. 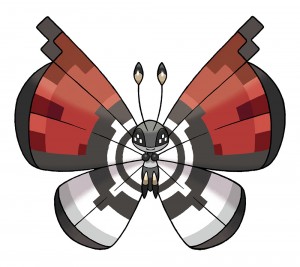 If you own either Pokemon X or Pokemon Y, or both, and live in North America, start up your game and go into the Mystery Gift option in the main menu. Note that you must have at least attained the Pokedex in your game file, and can have no more than 12 Wonder Cards in your possession from other event Pokemon. Select the option to redeem a gift, then specify that you wish to do it from online. So long as your 3DS/2DS can successfully connect to the internet, you will then receive your Poke Ball Pattern Vivillon, which can be picked up and added to an open slot in your party from the delivery girl in any Pokemon Center across the Kalos Region. Simple as that! Don’t forget to save your game afterward as well!

Like the Fancy Pattern Vivillon, the Poke Ball Pattern Vivillon comes at level 12. It wears a Classic Ribbon, is inside a normal Poke Ball, and knows Stun Spore, Gust, Light Screen, and Struggle Bug. It can come with either the Compound Eyes or Shield Dust ability.

Normally, Vivillon, the fully evolved form of the new commonplace bug-type Pokemon, Scatterbug, has patterns that are unique to real-world regions. Getting patterns outside of your native region, along with any event-sensitive Vivillon patterns that you may have missed, can only be done by trading with other players online, either via GTS or Wonder Trade.

If you’re outside of North America, you’ll have a chance to snag a Poke Ball Pattern Vivillon at this year’s Gamescom as well, should you be fortunate enough to attend! This same promotion is also said to be offered between August 29th and September 8th for European and Australian gamers. Those in France and Japan have been offered this particular Vivillon breed already.

Keep catching all of your news and updates on the Pokemon series here at Eggplante!