Following on the heels of protagonist, Shulk being confirmed as the latest playable fighter in Super Smash Bros. for Nintendo 3DS and Super Smash Bros. for Wii U, Nintendo has given more good news for fans of Xenoblade Chronicles. The highly acclaimed Wii RPG, in its entirety, will be coming to the 3DS!… Or, at least, the “New” 3DS and 3DS XL handhelds that were announced today.

The current line of 3DS handhelds will not run the game, with Nintendo explaining that it’s too large and visually ambitious, thus requiring the enhanced processing power of the New 3DS and New 3DS XL. Considering that Xenoblade Chronicles is already one of the most massive and gorgeous games in the entire Wii library, that isn’t altogether surprising.

Information is very limited on the New 3DS port of Xenoblade Chronicles, including whether or not it may boast any unique features compared to its Wii predecessor. A 3D effect is no doubt a given, but it appears that we’ll have to wait for any new information, particularly considering that the New 3DS and New 3DS XL won’t launch outside of Japan until 2015 at the earliest.

Initially released in Japan in 2010, Xenoblade Chronicles came about as the first dedicated RPG in Monolith Soft’s flagship Xeno brand, following the developer becoming a subsidiary developer of Nintendo in 2007. Xenoblade Chronicles marked another complete reboot of the Xeno games, taking place on massive landscapes formed by the dead bodies of two warring giants.

The open-world RPG released in Europe and Australia the following year in 2011, where it was just as widely praised and successful. It took 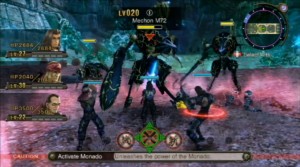 until 2012 for the game to reach North America, and it was the first game highlighted in Operation Rainfall, a fan movement that was meant to encourage Nintendo of America to localize a trio of Wii RPG’s in Canada and the U.S. While XSeed ended up publishing the other two petitioned Wii RPG’s, The Last Story and Pandora’s Tower, Nintendo themselves published Xenoblade Chronicles in North America, albeit only in Gamestop stores.

Keep hiking to Eggplante for all of your news and updates on Xenoblade Chronicles.