Unfortunate news for fans of Dreamworks Animation’s How To Train Your Dragon movies. Like the second movie, the third movie has seen a delay by an entire year, and has moved out of its planned June 17th, 2016 date. It will now come to theatres on June 9th, 2017, almost exactly a year later than planned. Dreamworks Animation has not provided any statement about why the movie was pushed back a year. 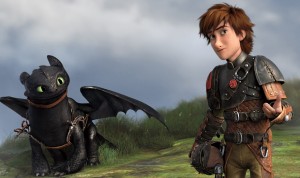 The delay could come from simple shuffling of Dreamworks Animation’s other movies, and may also be a side effect of wanting to re-tool the existing script to prolong the franchise past the initial three planned movies. The latter is especially likely, given that this year’s How To Train Your Dragon 2 was both enormously well-received and enormously successful at the box office, ultimately being considered by most viewers to be superior to its already very well-received predecessor. We reviewed How To Train Your Dragon 2 back in June and also consider it a bona fide masterpiece, with the movie ultimately ending up being our top scoring movie of the Summer, with a 97% final rating!

This delay will make 2017 an especially busy year for Dreamworks Animation. Aside from How To Train Your Dragon 3, the studio will also be releasing The Croods 2 and Captain Underpants that year, which were dated alongside a Puss in Boots sequel, Puss in Boots: Nine Lives and 40 Thieves, expected in theatres on November 2nd, 2018.

Eggplante will continue to fish for your news and updates on Dreamworks Animation.