After some uncertainty, Marvel Entertainment has just confirmed that Dominic Cooper has been officially signed to reprise his role as the young Howard Stark in next year’s upcoming Marvel Cinematic Universe-set miniseries, Agent Carter. He’s portrayed the father of the future Iron Man in two other Marvel Cinematic Universe appearances, the first in 2011’s feature film, Captain America: The First Avenger, and the second in the short film of the same name that inspired Agent Carter. 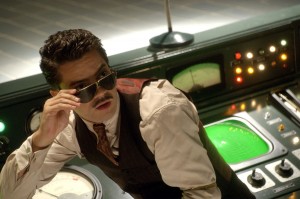 Marvel didn’t provide any additional details regarding the capacity of Cooper’s involvement in the Agent Carter TV series, but being a fellow founder of S.H.I.E.L.D. alongside the title character, Peggy Carter (once again set to be portrayed by Hayley Atwell), it’s probable that Stark will play a larger role in the miniseries. This is also evident with the confirmation that Howard’s butler, Edwin Jarvis, set to be played by James D’Arcy, will serve as the inspiration for Tony Stark’s A.I. program, J.A.R.V.I.S.

Agent Carter will take place in 1946, after the events of Captain America: The First Avenger, which saw Steve Rogers, the future Captain America, frozen in ice and presumed dead. Struggling to move on with her professional and personal life, British government agent, Peggy Carter continues the fight against the evil Nazi organization, HYDRA as WWII draws to a close, discovering dangerous secrets that could re-shape the world forever. As a result, she collaborates with Howard Stark on the formation of a government agency to regulate these unexplained threats, an organization that would one day become S.H.I.E.L.D.

The prelude to Agent Carter was teased last week during the Season Two premiere of Agents of S.H.I.E.L.D., showcasing Peggy Carter and the Howling Commandos in the past discovering a cache of dangerous HYDRA artifacts. It’s likely that the miniseries will continue from this jumping-on point, taking place around the events of the short film that inspired it as well.

Keep spying Eggplante for all of your news and updates on Agent Carter, and the Marvel Cinematic Universe at large.